BOSTON, MA –  In a hastily called press conference held Monday morning, private equity giant Bain Capital announced that it has acquired a controlling interest in Romney for President, Inc. — the corporate form behind Mitt Romney’s 2012 campaign.  The news comes after a string of disappointing performances by current campaign upper management, including a poor convention showing and the ill-advised selection of celebrity spokesperson Clint Eastwood. 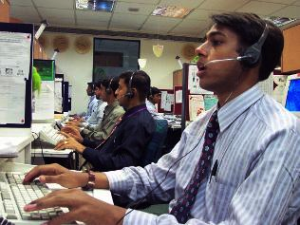 Hello, my name is Mitt Romney, how may I help you?

“This is what we do,” Bain Capital partner Byron Jacobs said regarding the transaction, “We find bloated, poorly run, underperforming concerns, trim the fat and set them on a proper course.  Can you think of any organization operating today that needs our help as much Romney 2012?  Well, we at Bain Capital could not.”

While commentators and interested parties did not argue with Bain’s track-record helping flagging organizations, some were a bit concerned with the speed at which changes were being made at the campaign. Reports indicate that it was mere minutes after the acquisition announcement that Mitt Romney was called into Bain’s corporate headquarters and informed his services were no longer required.  As of early this afternoon, according to a Bain press release, the candidate’s former duties have been assumed by a “flexibly-sized” team of minimum wage workers laboring at a small call center in Bangalore, India. 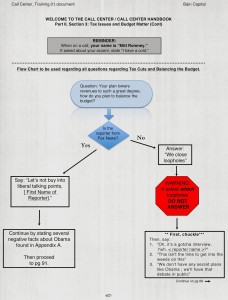 “No one takes pleasure in this kind of thing,” Jacobs told the press, “it’s just the reality of the global marketplace.”

Bradley Crate, Chief Financial Officer of the Romney Campaign, seemed to approve of his new employer’s move.  “It was no shock to me,” Bradley stated, “There’s simply no argument for continuing to employ a high-profile, multi-millionaire like Mitt Romney to parrot vague answers to reporters’ questions based upon a rigid, pre-fabricated script.  I mean, that’s what call center operators do everyday.  And they work for pennies on the dollar.”

Early response to the change from media insiders has been surprisingly positive.  David Gregory of NBC’s Meet The Press, for instance, gave the system very high marks. “Honestly, it’s pretty seamless.  I will admit that my operator’s accent threw me a bit at first, but once I got used to it, the call was precisely like interviewing the real deal.  The answers  were vague and unresponsive, and it was impossible to get the guy off his script.  No real information was brought to light, but there were some really nice zingers, and they were delivered fantastically.  If anything, the operator I spoke to was more polite, appealing and authentic than the actual Mitt Romney.  I was skeptical, but I gotta say that I like this system.” 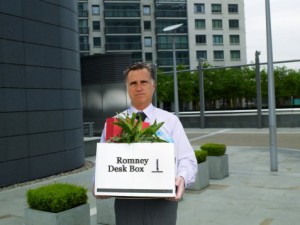 The realities of the global economy hit home.

Of course questions remain as to how some aspects of the campaign will play out moving forward.

“It’s all new territory,”  Obama campaign manager Jim Messina told reporters today, “but we’re rolling with it.  For example, President Obama has changed up his debate preparation and as of this afternoon is using a Polycom 2 EX speakerphone as a stand-in for Mr. Romney.  We just call Sprint customer service and let ‘er rip.  Those folks are sharks.”

As of the time of this article’s publication, there was no clear word on the fate of Romney’s running mate Paul Ryan.