| From the Desk of the Serious Citizen|

The Following is a Rare Serious Piece Offered by the Citizen for Your Consideration.  It is not, in any way, satirical.  Thus, it bares the stamp “From the Desk of the Serious Citizen.”

Viewers of the brilliant television drama Breaking Bad know something very bad is coming indeed.  Walter White, the show’s early sympathetic hero, and more recent villainous protagonist, has tired of being a success in secret and has begun to let down his guard.  Notably, in the cold-open of a recent episode, the high school teacher and newly minted drug lord ditches his practical family roadster and purchases a pair of sexy muscle cars for himself and his teenage son.

The show’s creator and executive producer Vince Gilligan need not (and does not) make excessive comment concerning the purchase of the flashy automobiles in order to leave the audience nervous and a bit flabbergasted during the first commercial break.  We understand at a gut level that Walter is tempting fate.

Walt enjoys his car (a little too much)

A high school teacher simply cannot demonstrate legally inexplicable reservoirs of wealth without questions being asked and explanations demanded.  It is tragic, perplexing and deeply revealing that the same cannot be said about the finances of the quarter-billionaire currently running to be President of the United States.

After all, where Walter White seems destined to be held to account on Breaking Bad, it has become painfully obvious that Mitt Romney will continue to appear on televisions throughout America without ever offering the thinnest of explanations concerning his utterly inexplicable, nigh legally impossible $100 million IRA.*

You read that figure right, folks: as part of a mandatory disclosure to the FEC, Mitt Romney dropped the insane bombshell that he has somehow accumulated $100 million in assets in his Individual Retirement Account.  If you know anything about IRAs, you should probably do your spit-take right about now.  I mean, that number is nuts!  It makes as much sense as the last season of Lost.  It’s the prestige to an illusion.  It’s fish-and-loaves miraculous.  A brilliant cold open if Vince Gilligan ever saw one.

By way of explanation for the uninitiated: IRAs (like Mitt’s) exist to allow individuals to shelter a small percentage of their annual income from taxation in order to promote saving for retirement.  The amount one can shelter from tax in this manner is, of course, strictly capped.  As a result, Romney could have legally contributed an average of no more than $30,0000 a year to his IRA during his career.   This being the case, the sum total the financial mogul could possibly have deposited in the account during his fifteen years at Bain Capital was right around $450,000.

That’s it.  $450,000.  That’s our starting point, and must legally be the entire basis (or base value) of the account.  All money above-and-beyond that figure must necessarily represent a return on investments made on that initial $450,000.

So, you ask, what’s the big deal?  Mitt, after all, is a skilled investor and had access to some pretty sweet speculative opportunities (like the wonderful low-basis, low value stock he received as a partner at Bain Capital).  Isn’t it possible that a little Private Equity magic can explain these numbers that seem extraordinary to us regular mortals?  Aren’t we just being jealous of Mitt’s wealth, as his campaign keeps implying when asked about this issue? 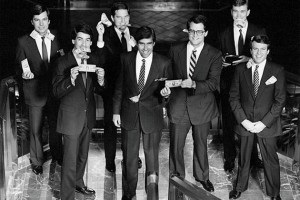 Romney enjoys his cash (a little too much)

A complete and emotionally appropriate answer to these questions requires expletives, furious gesticulation, and perhaps the use of props.  However, I will bottom line it for you:  Not a frickin’ chance!

Such a return on investment, of course, is not just unlikely.  It’s fanciful — even in the heady world of private equity.  It hardly seems worth stating that even the most aggressive Bain client, in the best possible economy, would have been over the moon to receive a ten-fold return on investment.  One can only imagine that such an investor would be saying a hearty “hello” to the Curiosity Rover on Mars if informed that their investment had been multiplied by a factor of 225.  But, that, ladies and gentlemen is precisely what Romney suggests he achieved with his IRA.

So what does all this mean?  It means that there are enormous, easy-to-understand and impossible-to-ignore questions at the heart of Mitt Romney’s finances — questions that demand explanations and go to the heart of Romney’s claim that his massive wealth is important evidence of his skillful and ethical financial stewardship.

Even more troubling than these questions, however, is our resignation about them — our visceral understanding that the rich and powerful will never be required to explain even the most suspicious of financial dealings absent preexisting, iron-clad proof of unethical conduct. 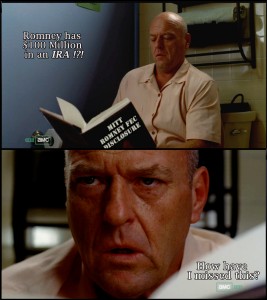 Would Hank let Mitt get away without answering a few questions?

And this is where I must circle back to Mr. White and his muscle cars.  You see, considered side-by-side, our reactions to Walter’s ill-advised purchases and Mitt’s $100 million IRA are nothing less than a Rorschach test for society at large — a test that demonstrates just how deeply we have accepted the notion that the rich in America play by an entirely different set of rules.

Watching Breaking Bad, we shiver with the certainty that Walter is going to get himself caught by spending thousands of dollars he should not have; watching CNN, we are impassive and roll our eyes at the notion that Mitt will ever answer a single question about the millions and millions of dollars that simply should not exist in his retirement account.

Unfortunately, these emotional responses matter.  A lot.  The fact that we are resigned to getting no answers from Romney means that we are not shocked when he stands mute.  Our outrage is utterly overwhelmed by our cynicism, and we can hardly call Mitt’s silence unacceptable when we have already accepted a world in which it is par for the course.  So, predictably, Mitt has remained utterly silent on the issue of his IRA and we, unsurprised, have let the matter slip.

Perhaps Walter White should take note and get out of the cooking business and into private equity while he still has a chance.  There’s still time.  Not much, but maybe a little.  He just needs to squeak in before some dogged DEA agent gets wise and starts asking questions.

Anyone out there know the current market value of a thousand gallons of methylamine?

* The fact that Walt’s indiscretions are likely to undo him has become increasingly apparent as the show’s current run has reached its climactic conclusion.  However, I will resist saying more in deference to those still catching up to the amazing finale.

** It is important to stress that I am, by no means, suggesting that there is currently any proof in the public sphere that Mitt Romney or his lawyers broke the law in creating or managing his IRA.  Indeed, some experts have suggested that the current valuation of Mitt’s account might be explained by an ethically questionable — but likely legal — practice of grossly undervaluing stocks that Mitt purchased from Bain Capital with money in his retirement account.  The point of this editorial is not that we know what happened in this case, but rather that we do not, and that we deserve an explanation.  After all, it’s Mitt’s contention that his experience in the world of private equity makes him uniquely qualified to be our President.  That being the case, isn’t it our right to ask questions about how that very secretive world goes about its business?

This entry was posted in Also Inside, Commentary: The Serious Citizen, Filter. Bookmark the permalink.