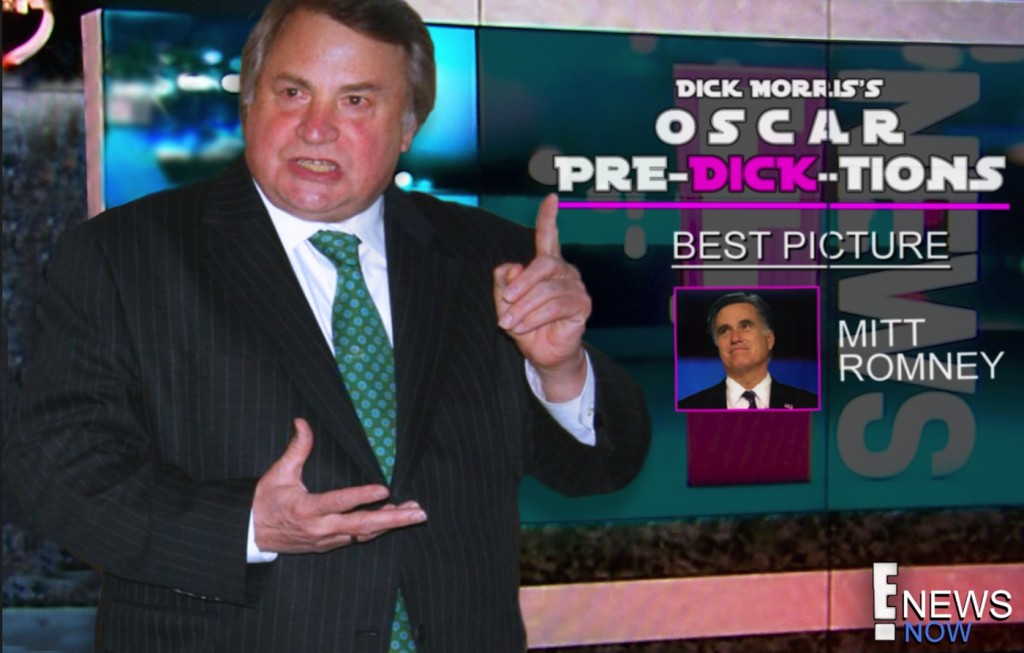 (LOS ANGELES, CA) Dick Morris appears to be back on the job market after the Conservative Pundit’s short stint on E! Entertainment Television came to a rather abrupt end late Wednesday evening when he predicted that former Republican Presidential Candidate Mitt Romney would win “Best Picture” at the upcoming 85th Academy Awards Ceremony.

“It was totally bizarre,” stated Chelsea Handler — host of E’s Chelsea Lately.  “The guy got out there and seemed totally normal until the producer asked him for a prediction.  Then it was like someone flipped a switch; he started ranting about the skewed Hollywood numbers and how surprised everyone was going to be when the finally tallies came in.  I was like: what is going on!?”

“I’ll tell you who else was saying ‘what is going on?!‘“ chimed in a clearly amused Joel McHale — host of the E! hit show The Soup: “The graphics department!”

“They were floored.  I mean floored.  But you gotta give it to them: they rolled with it like champs and got a picture of Romney up there in seconds.  We really have the best support staff in the business.”

“Anyway, I shouldn’t laugh,” McHale finished wiping at his eyes and trying to gather himself, “The poor guy’s out of another job and these are tough times.  Quite frankly, I’m not sure he’s entirely well.”

Indeed, the pundit’s mental health is a bit of an open question.  Mr. Morris — who was fired from Fox news just weeks ago after he famously and incorrectly predicted a “huge Romney landslide” in last year’s Presidential election — flagged the issue of a possible nervous condition himself in an interview with CNN’s Piers Morgan Thursday night.  “Frankly, I think I blacked out,” a visibly shaken Morris admitted, “someone asked me for a prediction and my senses were just flooded with the sights and sounds and feelings of all those years at Fox News.  It wasn’t an unfamiliar or scary sensation at all; to the contrary … it was comforting and familiar and then there was this mounting reflex … I guess I’ve just never tried to fight it before.  I struggled with it and lost.  I honestly don’t even remember the rest of the segment.”

Dr. Klaüs Von Benderspink — Morgan’s other guest for the night and an expert on cults, brainwashing and PTSD — was not surprised by Mr. Morris’ depiction of the event.  “I see this kind of thing all the time,” stated the thick-accented German as he peered in Mr. Morris’ eyes with the help of a Retina scope, “though this ‘Fox Pundit’ variation is undoubtedly new.”

Indeed, Benderspink quickly offered to take Morris on as a patient himself, provided the Republican Strategist would agree to come and work with him at the Benderspink Center for Creative and Cutting Edge Deprogramming in Stuttgart, Germany.

“This is an area I should study more and in short order,” the doctor explained as the show concluded, “This is a growing and very exciting field, indeed.  I have no doubt that an ever increasing number of those exposed to Fox News will need help coming to grips with reality in the coming years.”