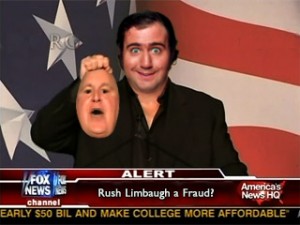 “Hello, My Name is Andy and You Are All Very, Very Stupid”

(PALM BEACH, FLA) When Rush Limbaugh’s official publicist announced the conservative pundit would be hosting a nationally televised press event Monday morning, everyone knew something big was coming.  But nobody knew how big.

Walking up to the microphone after a brief introduction, the corpulent talk show host tersely announced his retirement and then opened the floor for questions.  After a few minutes of rapid-fire interrogation, Limbaugh cut off a questioner, threw his hands high in the air, and yelled at the confused crowd:  “Come on, you lame-stream idiots — you drive-by morons!  Put on your thinking caps!  I’m Rush Limbaugh!  Look at the things I’ve said over my career. I’m telling you right now that this is your last chance ever to ask me anything!  What is the one question that you just have to ask the great and powerful Rushbo considering everything he’s ever said!?!?!”

With that, the room fell into a confused silence for a moment; reporters whispered, flash-bulbs flashed, but no one rose to the pundit’s challenge.  Then, as if out of nowhere, a hunched man drinking a martini and wearing white pants, a pink dinner jacket, and a ruffled, light blue tuxedo shirt burst to the front of the room and launched into a profanity-laced rant. 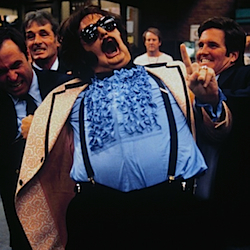 Even fighting with security, Clifton is less obnoxious than Limbaugh

“Ok, fatty mc’fat-in-pants!” the bizarre man exclaimed as security guards rushed to surround him,  “My name is Tony goddamn Clifton, and I have a motherf’ing question to ask your fat f’ing ass!!  It is, in fact, the only goddamn question anyone should ever have asked you, you fat stupid f**k!”

At this point security guards cornered the purported lounge singer and a physical altercation (involving a lot of slapping on the part of the man claiming to be Tony Clifton) ensued.  Limbaugh, however, quickly raised a hand and told his security men to hold back.  He then addressed his foul mouthed interrogator, “Fine, Mr. Clifton, why don’t you just tell us what this brilliant question is, if you are man enough!”

“Oh, I’m man enough, you goddamn putz,” the belligerent intruder stated, straightening his clothes and cracking his neck.  He then reached to his side and theatrically produced a bullhorn that had been slung over one of his shoulders.  “Here’s the question, you talentless hack,” he grunted over feedback from the bullhorn, “Are you fucking kidding us with all this bullshit?!  Seriously!  What are you?!!  A big fucking joke!?”

What followed was nothing short of stunning. 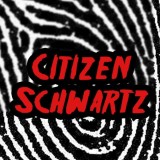 After a long pause, Limbaugh nodded somberly and answered, “Excellent question, Mr. Clifton. Excellent.  It is, in fact, the question.  The only question.  And to answer it:  Yes, in fact, I am! I am a big fucking joke.”  As he spoke, the rotund pundit reached up to his face, peeled off a latex mask and began stripping down to reveal a fat suit beneath his clothing.  When all was said and done, a silent press corps and a stunned nation found themselves face to face with a diminutive comedian long thought dead.

“Hello,” the small man said in his trademark high-pitched falsetto, “I am Andy Kaufman and you are all very, very stupid.  I will be taking no questions.”  Mr. Kaufman then scrambled off the stage.

That was two days ago.

Since those remarkable events, many questions have been answered, and footage of a sixty minutes special with Mr. Kaufman (set to air this Sunday) has emerged. 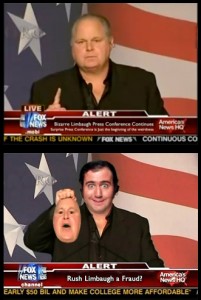 Here he comes to save the day?

One key fact behind this story now seems utterly irrefutable: given the documentation and testimony provided by Mr. Kaufman, it can now definitively be said that the obese political pundit named Rush Limbaugh did not exist until 1984 when Andy Kaufman faked his own death and created the character.  The coincidence of Limbaugh’s emergence as a national radio personality and the date of Kaufman’s death had gone unremarked until now.

“Look,” Kaufman told 60 Minute’s Scott Pelly, “I was sick of doing small gags that were only mildly or maybe even ‘significantly’ offensive and stupid — like the wrestling schtick and the Tony Clifton character that I or my friends would play at various times.  I wanted to do something radically obnoxious.  Just so offensive and asinine that it was barely even credible … even for a second, you know?  Just really pushing the audience to call bullshit … I wanted to see how far I could take it.”

“But to do that, I couldn’t be around.  You have to understand, if I was alive, everyone would have known it was me in that fat suit in a second.  Totally.  I mean c’mon.  Rush Limbaugh is such an obvious Andy Kaufman character that it goes without saying.  So, I faked my own death.”

Pressed for explanation on how he could possibly have allowed the “stunt” to continue for so long, Kaufman responded, “I guess I just kept ‘pushing it’ with the character … I know twenty eight years seems like a long time.  But the thing is … it was great money … and I was always so sure that people would realize it was a joke each time I took the idiot obnoxiousness of the character up another notch.  It was a game and I was kinda set on pushing it until I was discovered.  It just didn’t seem possible to me that people wouldn’t get it on their own.”

“It was all pretty fun at first … really for almost two decades; then about ten years ago I began to actually think America might never catch on” 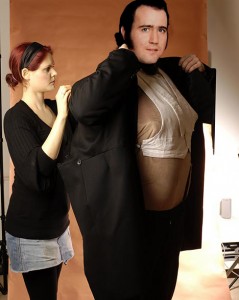 Donning the fat suit one last time Monday morning: “it felt good knowing I was saying goodbye to that big, fat idiot”

It was around 2002, apparently, that Mr. Kaufman began to worry he would be stuck in the Limbaugh persona forever.  “That was a dark time,” the comic related,  “I really did get addicted to OxyContin, you know.  But it wasn’t for my back.  It was because I felt trapped in the fatsuit.  I was like: how stupid are you people?!  The only thing that could possibly explain this asshole is that he’s a big joke!  But I didn’t want to tell people, I wanted them to get it.  That was the point, somehow.  I guess it was kind of my obsession.”

So, recovering from his addiction to prescription painkillers, Kaufman took things to another level: “I just started ramping up the asinine levels to epic proportions knowing that at some point, it would be too much and I’d get caught.  I still can’t believe people didn’t call B.S. when I called Abu Gharib a ‘fraternity prank.’  I mean … seriously, you think someone could say that out loud and not be pulling your leg!?”

“But that just wasn’t enough,” Kaufman continued, shaking his head “So, I rolled out idiocy after idiocy and nobody called ‘shenanigans’: there was the stuff about feminism only existing to let ugly women access society, the fact that Oprah was only successful because she’s black, the thing about me calling the first Black President of the United States uppity …. I mean, I popularized a song called ‘Barack the Magic Negro’ for chrissake!!!!  And nobody got that it was a gag!?!? What does it take?!?”

Apparently, it took more than Kaufman could muster.

“I got desperate recently,” Kaufman stated in a somber tone, “I took desperate measures:  I said that only Democrats voted for the TARP bailout and people ate that up.  What can I say about that!?  … Then I compared union protestors in Madison to the thugs beating people up in Egypt and said that black kids are applauded for physically assaulting white children in Obama’s America.  Nothing.  Business as usual.”

So, says Kaufman, he lost it:  “Yeah,  the Sandra Fluke incident was when I just really started to freak out.  I called that young lady a slut within a few weeks of saying Newt Gingrich cheating on his wife was a ‘mark of character.’ You have to remember, the Rush character himself had had four wives!!!  This was supposed to be the point where everyone started laughing.  But no: just outrage from the left and support from the right!”

“So I ‘upped the idiot ante’ even more and suggested that the reason the lady needed money for her pills was that she needed so many of them!  Because she had so much sex!  You get it, don’t you?!  Not even the biggest asshole in the world thinks you need more birth control pills if you have extra sex!  How could that not have clinched it!?!”

But Kaufman’s long time friend Bob Zmuda interceded and talked him into trying one more time.  “It was an amazing run and an awesome gag!” the somewhat unbalanced Zmuda stated, “I really hoped he could end it organically with people understanding what idiots they had been for taking Rush seriously for even a second.” 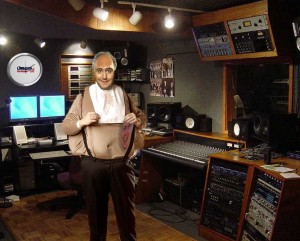 Kaufman at the start of the three hour makeup process he underwent every morning for 28 years.

“I agreed,” Kaufman related, “so I pulled out all the stops a couple of weeks ago and told my loyal listeners that I thought it was possible that Al Qaeda gave up Osama Bin Laden in order to help Obama get reelected.  I mean: I seriously said that!!!!  And nobody even blinked.  They were like: well, there goes that Rush guy again!!!!!  And my listeners … some of them actually bought it.  I mean they honestly thought that made sense!  Well that was it.  Even Bob admitted nobody was ever gonna get it at this point.  There was no bar left to raise, no standard left to lower.  We had reached Duh-Con 1.”

So the pair went about scripting the spectacle we all witnessed Monday morning.  “It was really great to get out of the fat suit,” Kaufman related, “and I have to admit, arguing with Tony Clifton again … it all just felt right.  And it was really funny to see how tame that character is in relation to Rush after all these years.  I mean I knew … but there’s knowing and then there’s knowing, ya know?”

Whether or not Tony Clifton was played by Bob Zmuda on Monday remains a mystery; Kaufman’s lips on the subject are sealed.  Some commentators who have studied the tape, however, have suggested the physicality of the role would have been too much for the older comedian given his advanced years.  “I think it was either Gerard Depardieu without makeup or comedian Rob Delaney in a very elaborate disguise,” one pundit with knowledge of the subject opined.  “My money’s on Delaney.”

Regardless, of the details, however, one thing is clear: Rush Limbaugh was a big fat joke that lasted far too long.  And we all fell for it.  Shame, as Andy Kaufman would say, on us.