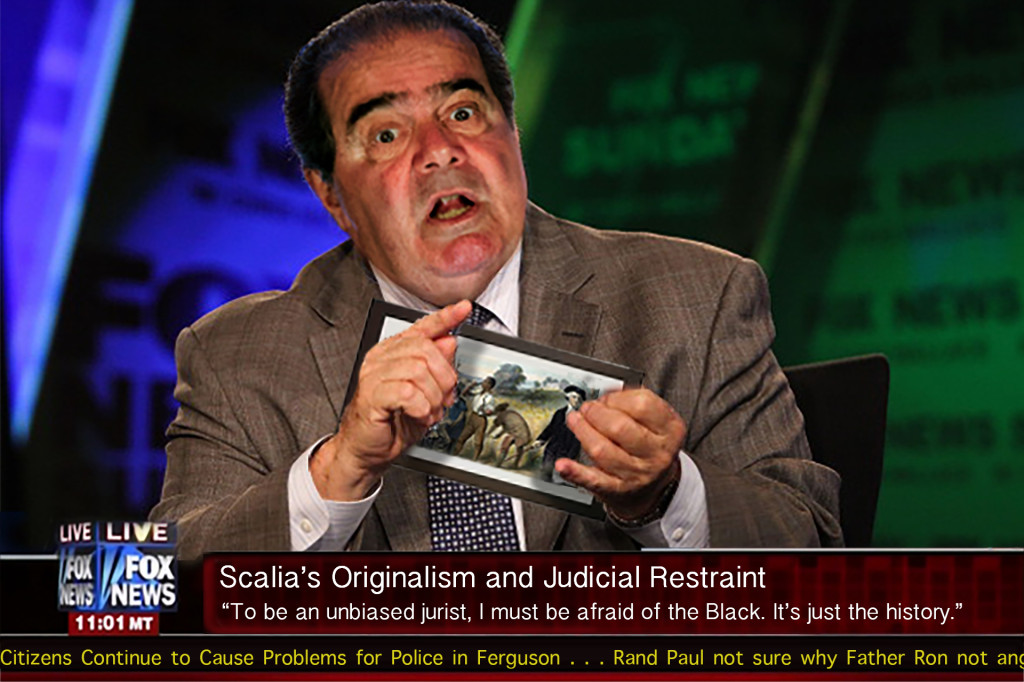 (WASHINGTON, DC) – A narrowly divided Supreme Court Friday ended a decades-long trend of expansively reading the 2nd Amendment to the United States Constitution — and greatly broadening the right to bear arms — by finding that the protections and liberties guaranteed by that clause do not apply to “people of African extraction, commonly known as ‘blacks.’”

Set against mounting violence in Ferguson, MO, the case was taken by the court on an emergency basis.  Attorneys for the litigants in the matter of Burress vs. Ferguson County argued that the need to protect oneself from a militarized, overreaching state was a core rationale for the court’s expansion of 2nd Amendment rights.  While agreeing with that interpretation in principle, however, a majority of the justices found that black people are simply “a different matter entirely.”

Writing the controlling opinion, Justice Antonin Scalia — a passionate “originalist” in much of his jurisprudence — stated that it was simply inarguable that the Founding Fathers never meant for the right to bear arms to apply to slaves or “members of the black race” should the slaves ever be freed.

“Simply put,” Scalia wrote in the opening lines of his powerfully worded decision, “it is laughable to suggest that even the few abolitionist founders who existed would have been anything but horrified at the thought of a black man with a gun. Thus, as a jurist, so must I be; that is what originalism means.  So, going forward, I approach this case in the only way I know how: as a jurist who is horrified at the idea of an armed black man.”

From there, Scalia’s decision goaded the dissent for suggesting that either the equal protection clause or any amendment to the constitution was ever meant to expand the right to bear arms to African Americans.  “As my survey of the history of constitutional conventions, state ratification votes and relevant legislative history indicates, I have no doubt that the largely white majorities who voted for measures like the Civil Rights Act of 1964 were fine with giving Black people many rights, but that very few if any of them ever meant to say that these people could be armed.  Now I know that my dissenting colleagues are prone to flights of fancy, but the idea men like Lyndon Johnson wanted to give black men guns? That is beyond absurd.”

For their part, the dissenters seemed simply flabbergasted by the majority decision in every regard.  “I don’t know why we took this case,” stated Justice Ginsburg, “I don’t know why we decided it and I’d certainly like to say that I don’t know how it’s possible that anybody could make the argument Justice Scalia offered here today.  However, to me it seems like a natural extension of his dissent in Windsor [the voting rights case].  If anyone can makes sense out of that opinion without saying ‘black people are just different,’ he or she is a better jurist than I.”

For his part, Justice Clarence Thomas — the sole African American justice sitting on the bench today — entered a special concurrence indicating that “Justice Scalia and the majority simply did not go far enough” in pointing out how “patently absurd is the notion that white legislators ever meant to give black people guns.”  Like Justice Scalia, Thomas embarked on his own historical review in order to make his point clear, and he did so with great force.**

[ ** Editorial note: Language from Thomas’ historical overview has been omitted from the end of this article by decision of the Citizen Schwartz editorial staff due to the Justice’s liberal use of the “N-word” and other racial epithets in making his argument.  The language of the decision should soon be posted on the Supreme Court’s website.]