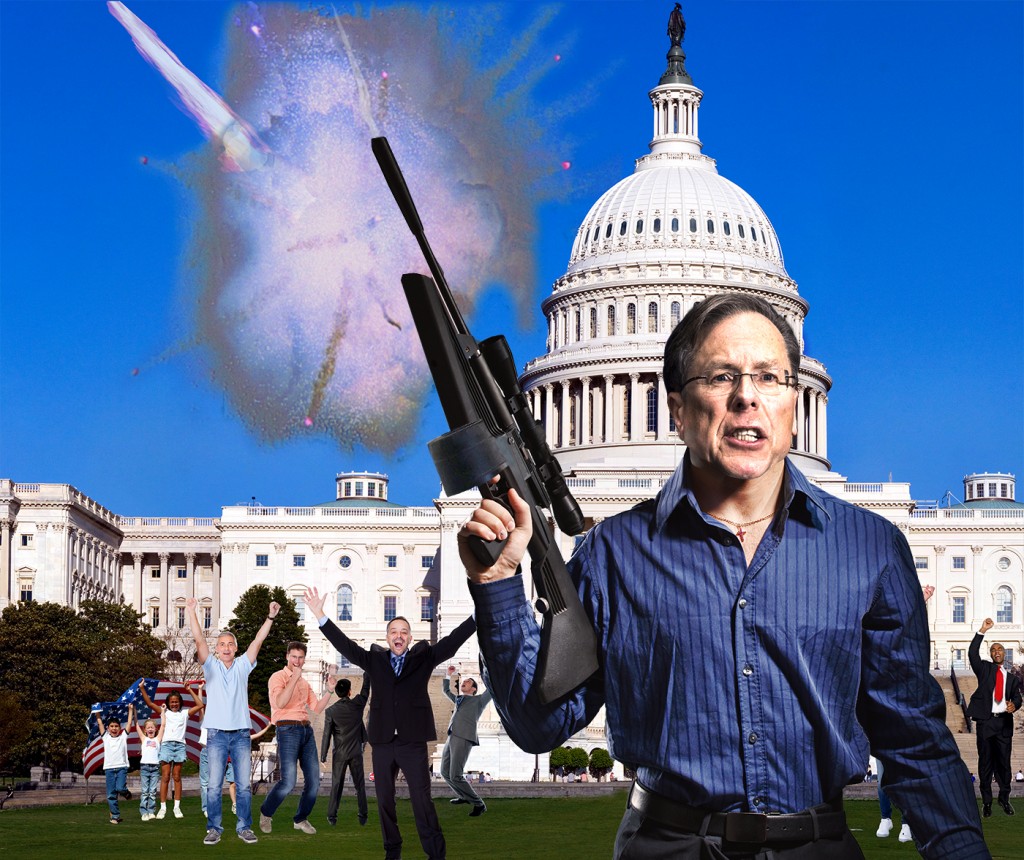 (WASHINGTON, DC) When it was discovered late Friday afternoon that Space Rock 2012 DA14 would not miss earth as scientists earlier predicted but would, in fact, impact its surface resulting in an extinction-level event — most of the planet’s population reacted with impotent panic. Wayne LaPierre, visiting D.C. on a lobbying junket, on the other hand, responded to the crisis with steely resolve.

“I had already run the numbers and suspected that we had been given bad information by the astronomical community,” LaPierre told a gaggle of reporters on the Capitol steps late in Friday evening. “My calculations suggested that DA14 would strike the Earth at approximately 4:15 and 12 seconds Eastern Standard Time, and that D.C. would be an excellent place from which to mount a defense.”

“I already had plans to be in Washington, so it was just a matter of making sure I had a weapon as powerful and efficient as the Bushmaster semi-automatic and a drum of at least 100 rounds of hollow-point ammunition with me should it turn out my a calculations were correct.”

As it turned out, LaPierre’s assessment was accurate within millimeters and fractions of a second.

“Sometimes I hate it when I’m right,” LaPierre said, “but there was nothing to do but take care of business.”

So, at 3:59 PM Eastern Standard Time, as other denizens of D.C. scattered powerless in terror, Wayne LaPierre cooly assembled his weapon (a heavily modified AR-15 with special stock and scope) on the steps of the Capitol Building, walked out onto the mall and, in under twenty seconds of firing, placed one hundred precisely positioned hollow-point projectiles into the surface of the approaching meteor.

The results were spectacular.

“I would have thought it fanciful had I not seen it myself” stated astrophysicist Albert Jackson, “but having seen the event and spoken to Mr. LaPierre, I now understand that the perfect placement of the 100 small projectiles, married to the rapidity of the delivery and the nature of the hollow point ammunition itself all combined to create a chain-resonant effect on the asteroids surface. It was this effect that — through a series of harmonic reactions — superheated the combustable surface of the space rock, forcing the outer shell of the meteor to explode, ricocheting the remainder of the rock back into space. To the layman and the naked eye, it might have simply appeared that LaPierre blew the meteorite up with his rifle. But that would be impossible. This was just good science and, critically, the availability of the tools necessary to get the job done. I can only thank God and the vigilance of the NRA that Mr. LaPierre had those tools available and was able to save the lives of every man, woman and child on the face of planet Earth.”

Indeed, the revelation that the world owes its continued existence to an assault rifle and large ammunition drum has had an immediate and profound impact on the political landscape. Late Friday night, a contrite and humbled President Barack Obama announced his intention to drop all attempts at further gun regulation, as well as his decision to award Wayne LaPierre the Presidential Medal of Freedom — the nation’s highest civilian honor.

“For months, I have argued that there was no valid reason for regular citizens to possess these high-powered weapons which are capable of firing so many high-caliber rounds so fast without the operator even needing to pause to reload,” the President stated.  “Clearly I, and liberals like me, have been dead wrong the whole time.  There is no longer a doubt in my mind that we must arm our population with these powerful tools in order to destroy and divert deadly planet-killing Meteors and other space-based threats.  It is my profound hope that Mr. LaPierre can find it in his heart to forgive me and work with my administration as we see to it that every man, woman and child in America is provided with a Bushmaster rifle and a 100-round drum so that we are at least minimally prepared should another asteroid ever take a path that threatens our very existence and way of life.”