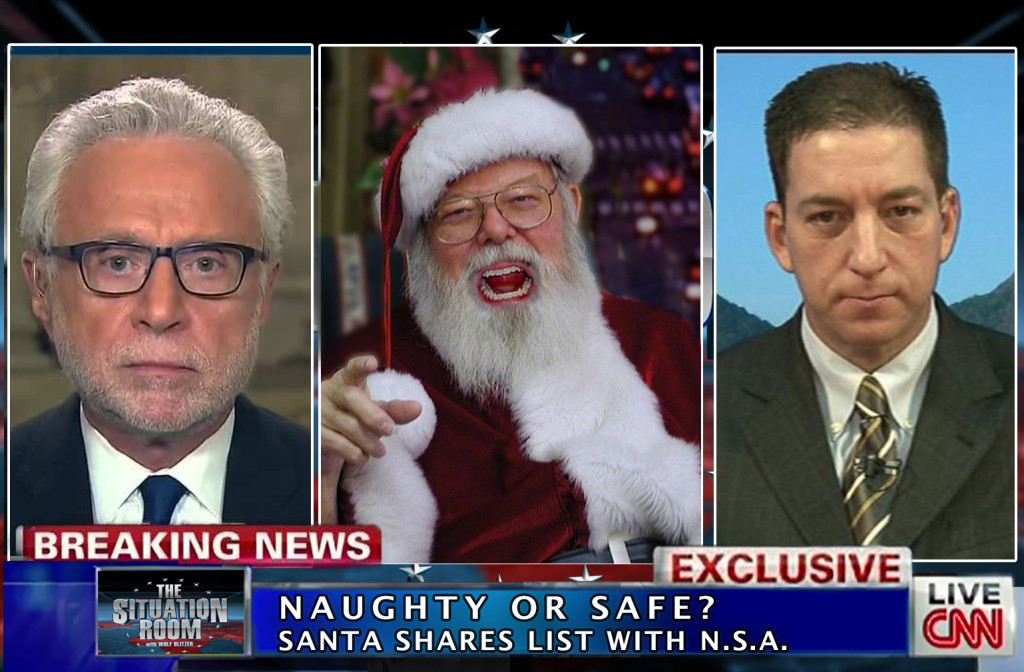 A Fiery Father Christmas Tried to Assure the World that “On Balance” His Program
“Has Always Been in the Best Interest of Good Children Everywhere.”

(North Pole) –  Santa Claus, the beloved figure said to bring Christmas presents to good christian children all over the world, today admitted that he also brings something else.  “Ho, ho, ho,” Santa told CNN’s Wolf Blitzer late Tuesday afternoon, “I also bring heightened security.  It’s my responsibility in a post-9/11 world.  I need to do what I can.  Ho. Ho. Ho.”

Asked for clarification, the Jolly Mr. Claus admitted that he had allowed his significant fact-gathering apparatus to be put to work for the U.S. National Security Agency and had, in fact, provided that organization with his an un-redacted copy of his previously sacrosanct list of all the children in the world sorted by their status as being either “naughty” or “nice” during the previous calendar year. “At least he’s finally admitting it,” sniped an angry Guardian journalist Glenn Greenwald — also a guest on Blitzer’s telecast.  “I mean, this jocular admission comes after months of slandering both Mr. Elf and Mr. The Snowman.”

Indeed, former Claus employees Julian Elf and Edward T. Snowman have been urging and examination of Santa’s practices for months after the pair left work, leaking a treasure-trove of communications between Santa’s North Pole data collection outfit and various US intelligence agencies.  However, until now Santa had been reticent to discuss the matter claiming that both Elf and Snowman were in violation of contract and North Pole law in discussing anything having to do with the list. He had further suggested that while information about the letters might have been shared, the content was never seen by NSA agents.  This has since been proven not to be the case.

“Look” a suddenly animated Mr. The Snowman announced as Mr. Greenwald placed an old silk hat upon his head.  “I may have been magically born yesterday but even I know that if you give people free access to personal information, they’ll take a look.  It’s just human nature.   There must be checks and balances.  I’ll melt before I accept anything less.”

Greenwald himself was not only indignant concerning the privacy issues raised by the NSA’s access to Santa’s list; he found the Security Agency’s desire to access the information in-and-of-itself troubling.  “This list is useless as a national security matter.  I mean, every Jewish, Muslim or otherwise non-Christian child is listed as being naughty here!  How can that help!?  I myself am listed as ‘naughty’ twice, once for my lack of belief and once for being ‘strident’ and ‘uncompromising.’   So what if I am?  Did you break any stories that have made the country better this year, Mr. Claus?   F**k that.  I have every right to get a present.”

While the usually Jolly Saint Nick showed flashes of anger and refused to acknowledge that any mistakes have been made in developing the current policy, he did seem to admit that his practices must be examined going forward. “Ho, ho, ho,” Santa concluded, gathering himself after losing his cool for a moment, “I might have to reevaluate the situation next year now that all this information has come to light in such an unfortunate, incomplete way.  These leaks were just terrible and have and undermined the world community’s sense that we are closely adhering to the spirit of Christmas here.  If some adjustments need to be made in light of discloses, they will be; my first goal is that all have a merry christmas.  Ho, ho, however: security matters too, and I assure you that, on balance this program has always been in the best interest of good children everywhere.”