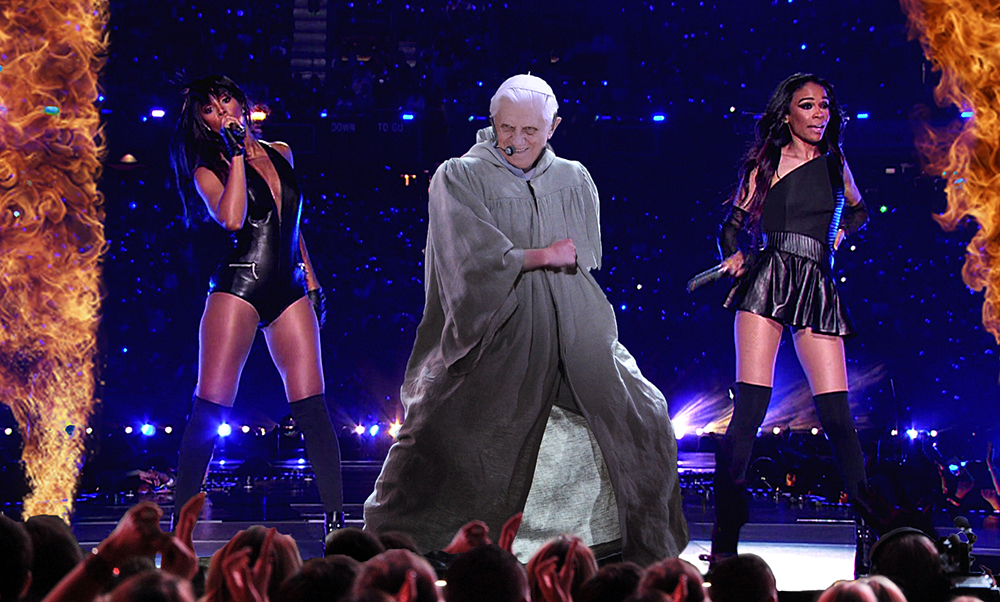 (VATICAN CITY) Pope Benedict XVI announced in a press release Monday that he would resign on February 28th due to circumstances arising from his “advanced age.”  He added, further, that “my retirement has nothing whatsoever to do with the scandal that has so plagued the Church in recent days nor the part I played in it.”

It is assumed that the scandal to which the Pontiff refers is the well-reported media kerfuffle that broke out upon the revelation that the Pope was lip-synching to a pre-recorded track when he performed with singer Beyoncé Giselle Knowles-Carter (commonly referred to simply as Beyonce) at this year’s Super Bowl halftime show.

“Clearly, this Pope was involved in a dark chapter for the church,” Papal historian Aldus De Luca Conti said when reached for an interview, “There can be no doubt that he is aware that many feel he and the Church really let down their ‘fans’ on that one — particularly their youngest, most innocent and emotionally vulnerable fans who trusted deeply in the Church and now feel a profound loss of innocence in the wake of the whole scandal.”

“Still,” De Luca Conti continued, “I take the Pope at his word.  If he says that the threat of further revelations about his involvement in this disturbing and seemingly ever-widening scandal had nothing to do with his resignation, I totally believe him.”

Indeed, the Pope was adamant on this point: “I deeply regret that so many young Catholics felt hurt because I did not use my own voice when called to do so, but rather mouthed along to fixed and pre-determined words designed only to make the Papacy and Church look better through a lavish and theatrically staged performance.  Perhaps that was a mistake in judgement … but again, live music is very tricky during major events like the Super Bowl.  In any event, and I must stress this one final time: that scandal, regrettable though it is, is 100% in the Church’s past and my abdication today has nothing whatsoever to do with that issue.”

Singer Beyonce could not be reached for comment at the time of this article’s publication.

This entry was posted in Also Inside, Breaking, Filter, Humor and tagged beyonce, lip-synching, pope, resignation, Satire. Bookmark the permalink.