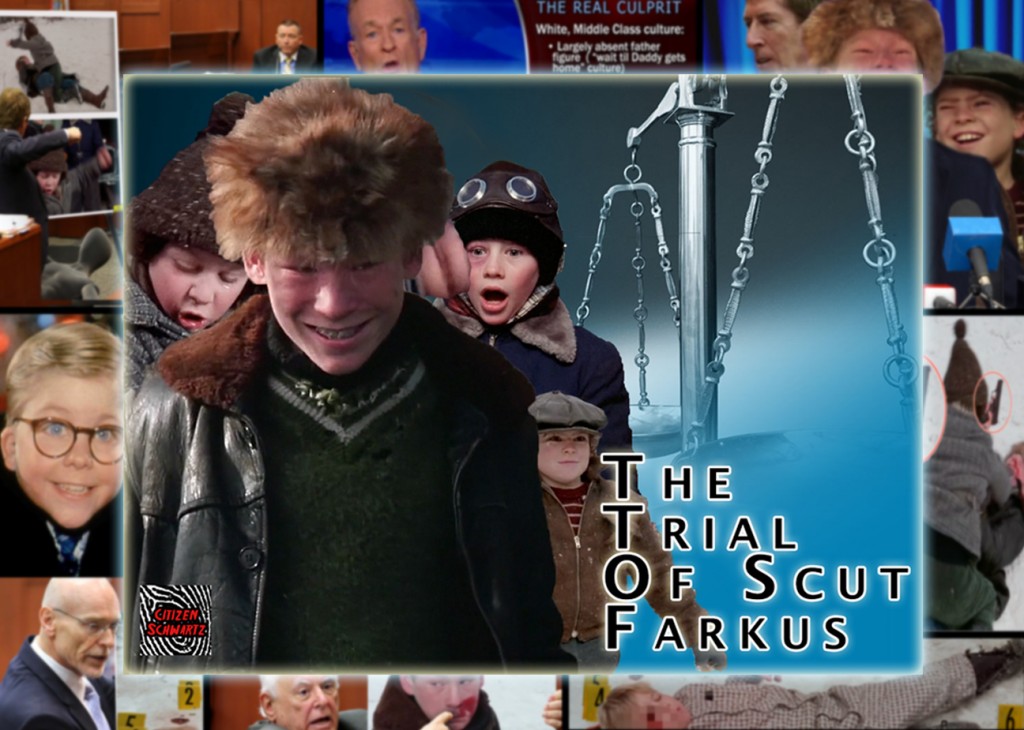 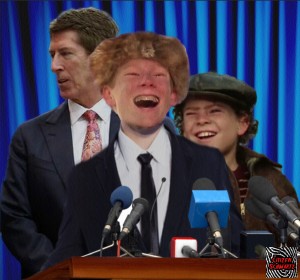 Farkus all smiles after verdict

The verdict marks the end of a legal saga which had gripped the country since last December when the tragedy was first reported in the national press, and televisions across the nation were filled with little else but the story of little Ralphie Parker throughout the holiday season.

At the time of those initial reports, the incident was widely thought to be a clear cut murder case — a fight provoked by a bully which ended in the tragic, inexplicable shooting death of his victim, Ralphie Parker, a boy who was just trying to walk home.

As the prosecution put it: “Farkus had been following Ralphie all over town, making him feel unwelcome and uneasy in his own neighborhood;  all Ralphie wanted to do was get to get to his house unmolested.”

Further supporting the impression that Farkus provoked an altercation with Ralphie was the widely reported fact that the older boy had been asked to break off his pursuit of young Parker.

DEFENSE EXHIBIT A
Critically, a video emerged at trial that confirmed much of Farkus’ Christmas Story 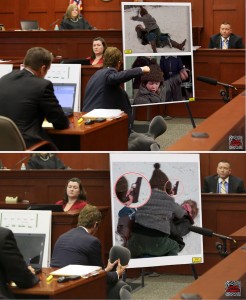 “Let’s make no mistake here,” the Prosecutor told the Jury in his closing argument, “the authorities — both teachers and parents — had sternly told Scut Farkus he should not continue to follow Ralphie around like this. Scut Farkus did anyway.  That’s what started this tragic fight which ended in the unnecessary death of a young boy.”

Farkus’ Defense team, however, was quick to point out that there was no evidence that Farkus had ever physically assaulted Ralphie beyond the rather innocuous act of having his toadie, Grover Dill, throw a snow ball at him once or twice.

Greatly bolstering the defense case was the testimony of multiple eyewitnesses indicating that Farkus did not throw the first punch.  Rather, witnesses stated, it was Ralphie who charged Farkus, throwing him to the ground, straddling his prone body and beating him about the head and shoulders while Farkus cried out for help. 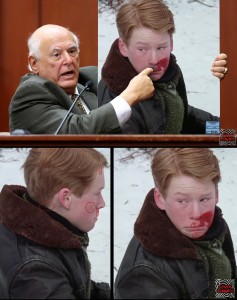 “Honestly, I feel bad saying this cause Ralphie was my best friend,” Flick Green testified, “but it was like he snapped. I know him real well and, like, the look in his eyes … it was so intense … it was almost as if I could hear his internal monologue … and it was like he was saying stuff about a ‘red hot flame’ in his brain and his ‘fuse blowing’ and that … like … he was ‘totally out of his skull.’”

“And then he just launched himself at Scut and started wailing on him. You should have heard the words he said while he was hitting him!  Just wow!  I had never heard words like that … ”

At this point in his testimony, Flick trailed off, and the court fell silent.  Clearly fighting off emotion, the boy then took a sip of water and wiped welling tears from his eyes.  “Anyway,” he concluded, “that was when Scut pulled out the gun and shot Ralphie dead.  Just bam.  Dead.  He was gone.  So, you know, that was a lot worse.  You know.  Than the cursing.” 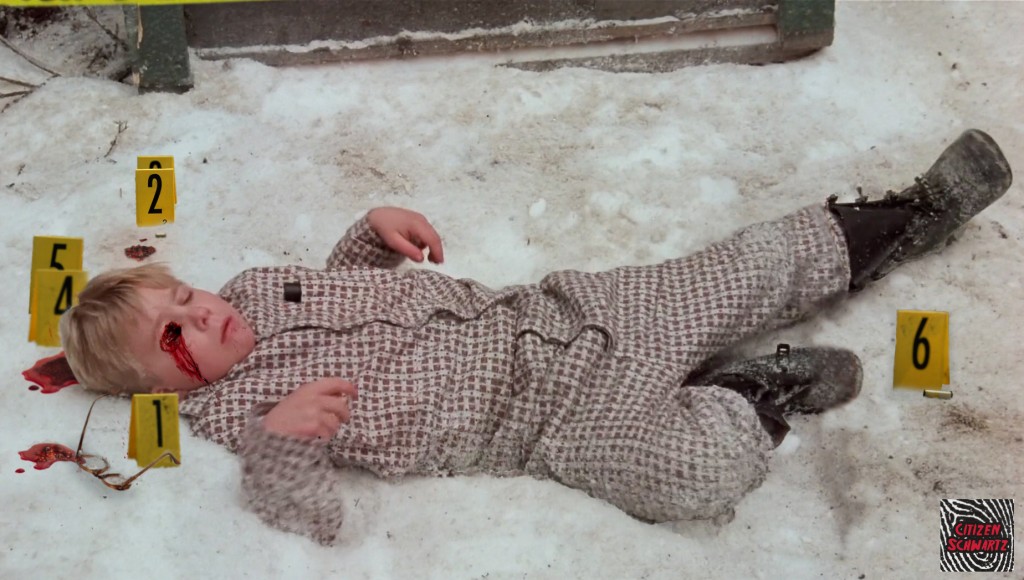 The defense team, it should be noted, never minimized the loss to the family, stating that the entire event was an “enormous tragedy.”  Still, the verdict came as the second big win in as many weeks for the Defense team of Don West and Mark O’Mara, who flew to Indiana to represent Farkus at the conclusion of the trial of George Zimmerman.

“To be honest we wouldn’t normally take another murder trial so soon after a big case like that,” stated Don West, “however, the facts here were nearly identical to those presented in George’s case so we were totally confident we could take it on. The only real difference here is that there is an embarrassment of evidence that Ralphie was the physical aggressor and that he was on top of Scut when — obviously in fear of great bodily harm — he pulled his gun.”

“I mean, in George’s case we had vague witness accounts and a few of George’s friends saying it was his voice crying out for help on those 911 tapes.  Here we have eye witnesses and actual video.” 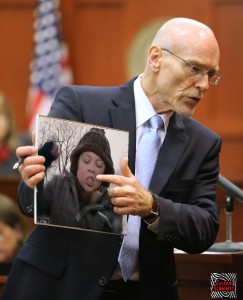 Don West Shows Jury How Terrifying, “Suspicious” Ralphie Could Be

Pressed on the issue of whether or not the cases were truly identical in all other regards, Farkus’ other attorney Mark O’Mara admitted there was another major — but non-substantive — difference: “Well, this was a little white boy who died.  But obviously, that can’t and would never change the outcome.  I wouldn’t want to live in a world where it was okay to shoot a black kid dead if you got in a fight with him but it wasn’t okay to shoot a white one.  Would you?”

One notable media outlet has surprised many by seeming to be in full agreement with the defense in this case.  Almost every Fox News personality has expressed with remarkable intensity that Ralphie Parker’s killer must go free; any other verdict, they suggest, would undermine the credibility of the courts and make a mockery of the notion that criminal justice in the United States is dispensed without regard to race.

“We believe in Stand Your Ground here at Fox News,” Bill O’Reilly told listeners on Tuesday night, “And you can’t look at that footage of Ralphie Parker and think ‘oh: people get in fights, especially kids.’”

“This kid was a punk … and I will not tolerate any of this nonsense about this just being some sort of ‘coming of age’ moment for a child standing up to a bully!  What happened that day could have been avoided.  But not by Scut Farkus or Grover Dill.”

O’Reilly then turned to discussing what he sees as the growing problems with white, middle-class values and how they have created a culture of violence that threatens the very fabric of America. 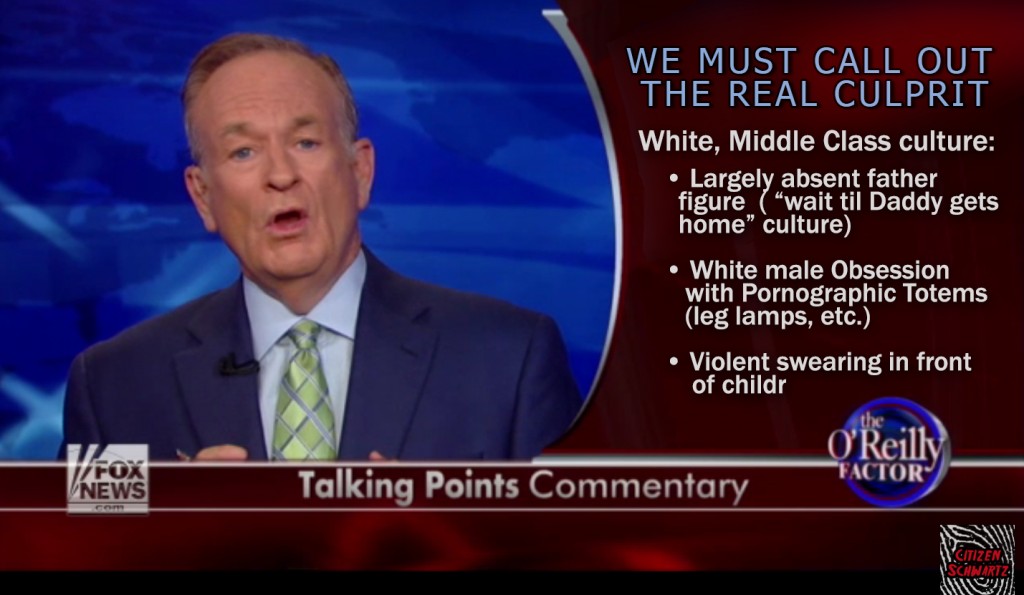 This entry was posted in Also Inside, Breaking, Humor, TOP STORIES. Bookmark the permalink.