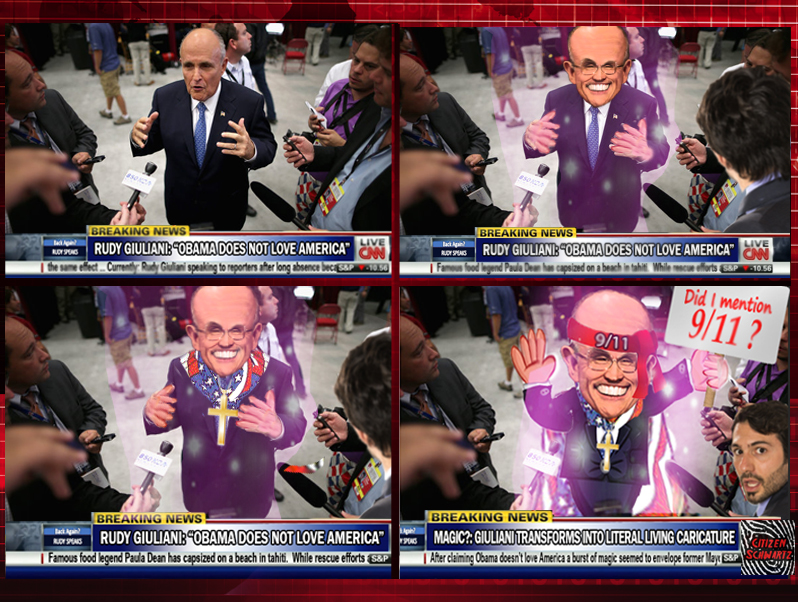 FORMER MAYOR AS SURPRISED AS ANYONE: “THERE MUST HAVE BEEN SOME REAL MAGIC IN THAT LAST CLAIM ABOUT OBAMA NOT LOVING AMERICA”

(New York) Former New York City Mayor Rudy Giuliani on Saturday transformed into a literal cartoon caricature of himself while trying to explain that President of the United States Barack Obama has no love for the nation he leads because of his communist upbringing.

“I don’t know how to explain it,” stated Ari Aguero of the Associated Press, “he was just saying the most cartoonish things you could possibly imagine and then he was surrounded by this glowing light and poof he literally turned into a cartoon version of himself draped in the American flag, carrying a cross and wearing a 9/11 Rambo hand band.”

“It would have been really frightening if it didn’t just seem so appropriate,” stated CNN News corresponded Francine Schechter, “It was like — well that was surprising but now that it’s happened, I kinda feel like I should have seen it coming, ya know?”  Others shared Ageuro’s startled but largely sanguine response and some in the scientific community say we should have been ready for such an eventuality all along.

Indeed, Arthur Hobkens, a Professor of theoretical physics at NYU explained that the transformation at hand is wholly consistent with current theoretical models of the multiverse.  “There’s no magic here,” the professor stated bluntly, “this is a case of a rip in the fabric of reality.”  The Professor went on to explain that the combination between Giuliani’s astonishingly anachronistic allegations about communism and his clearly racist attitude coupled to a simultaneous denial that race was involved at all —  created a “kind of sinkhole” in time and logic itself.  As a result, “Giuliani ripped a hole in the fabric of reality.” In all likelihood, the Professor claimed, the Rudy Giuliani from this reality has likely changed places with his counter-part from a caricature universe and is currently living in a cartoon world in which all of his allegations and wild theories are actually true.  “I wonder,” the professor concluded, “if he’s noticed.”