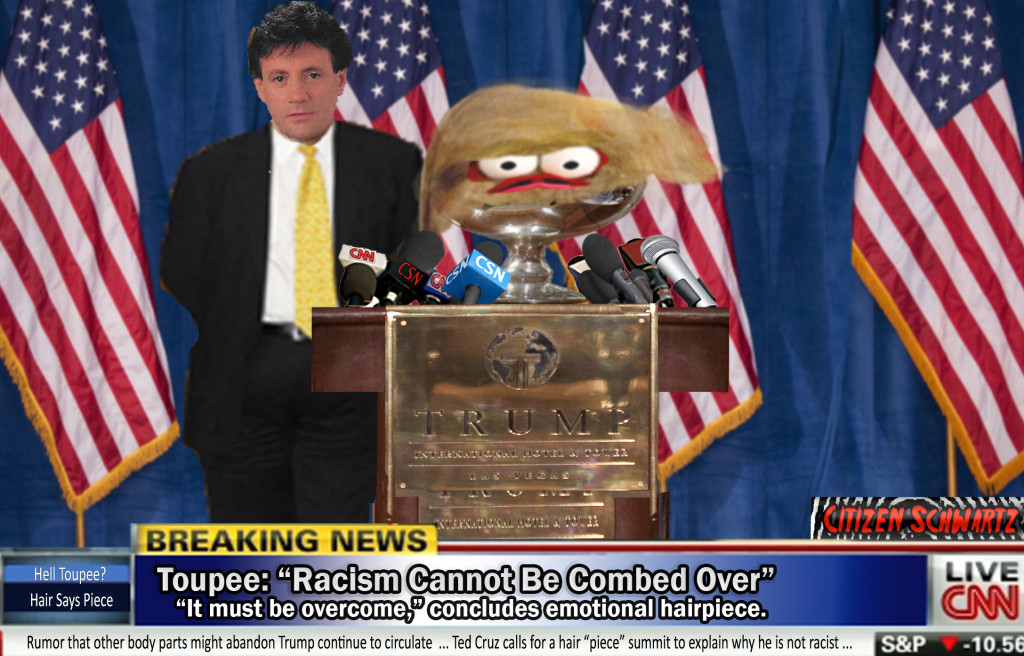 The “Trump-piece” appeared accompanied by Sy Sperling — former President of the Hair Club for Men.

(NY, NY) Earlier today, an unexpected voice joined the cavalcade of businesses and private citizens seeking to unambiguously distance themselves from Donald Trump.  Corporations with ties to Trump ventures and public personalities associated with the Real Estate mogul have largely been at pains to express their displeasure with his remarks — which included the assertion that most Mexican immigrants are drug smugglers and rapists.

Notably however, many of those with the closest ties Trump — particularly his best friends within the Republican party — have remained reticent to criticize the newly minted candidate.  That changed in a major way this morning when Donald Trump’s toupee called a surprise impromptu press conference to express his horror at Trump’s remarks.

“I’m just sorry it’s taken me this long.  You have to understand,”  the hairpiece explained while deftly controlling a riveted crowd, “my job is to cover up ugly things that nobody wants to see.  That, frankly, we’d all like to pretend don’t exist.  I’ve done that for Mr. Trump for years.  That’s what I do.  And I’m proud of the work I’ve done here.”

“But racism isn’t a bald spot,” the toupee continued — hammering on the podium with surprising force for emphasis, “You Simply Cannot Combover Racism!  You can’t use weasel words and just say something pathetic that changes nothing while everyone knows something horrible is still out there.  No.”

“There’s a measure of polite acceptance implied by explaining these — forgive me for saying so — BALDLY racist comments away.  We can’t have that.  Ideas have power and you must meet horrible — truly evil — words with terrible outrage.  That’s how the marketplace of ideas works, people. You must holler at the top of your lungs, “that idea is horrible!”   Your clear condemnation must match the insidiousness of the belief or it will continue to persist.  Trust me, if Donald doesn’t believe what he said, he’s intentionally speaking to people who believe it.  That is a terrifying prospect.  Just look at Ferguson.  That kid — when he killed those people — said things just like what Donald said to launch his Presidential campaign.  Well, if this campaign is a joke, it’s become a bad one and I am wigging out.”

At this point the crowd burst into a lengthy standing ovation as the generally humble periwig made his way off stage with the assistance of a surprise guest — Sy Sperling, the one-time President of the Hair Club for men (who, notably, was also a client).

The affiliation between Mr. Trump’s former toupee and Mr. Sperling is not entirely clear but everyone seemed to agree that his presence made some kind of bizarre sense — all things considered.