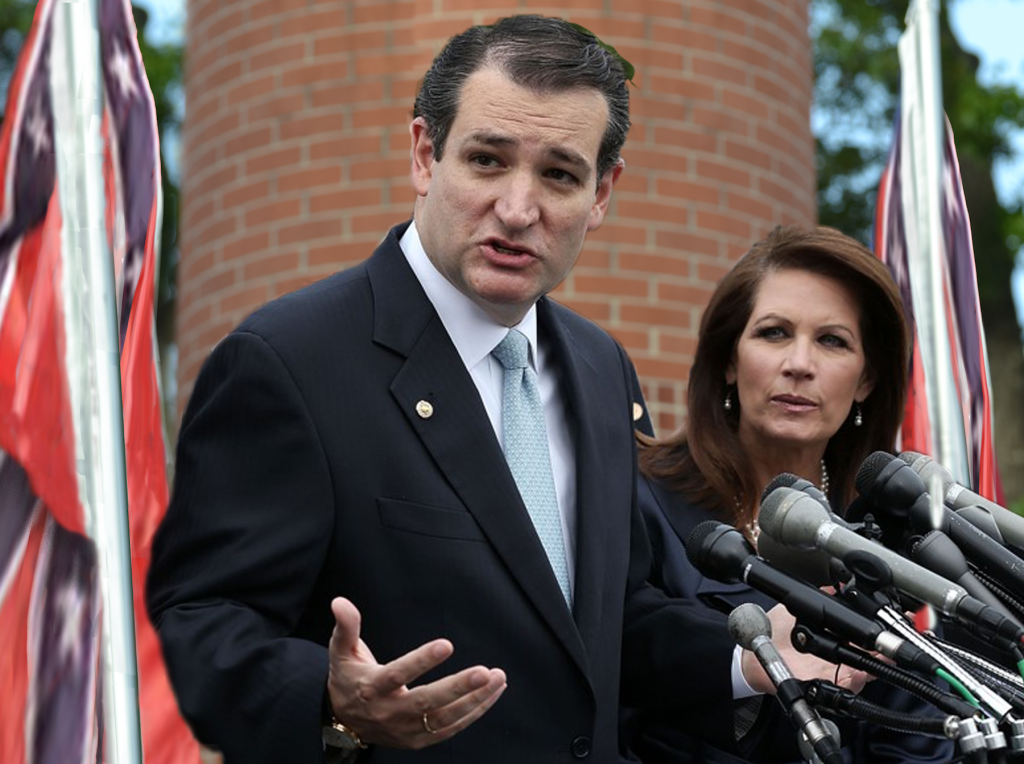 Referring to the Confederacy as a “wonderful friend to America” and a “key ally in the war on terror,” Michele Bachmann (R-Minnesota) seemed unperturbed by the Confederate Flags flying at Ted Cruz’s recent rally.

WASHINGTON, DC  (CSN) Republican Sen. Ted Cruz vowed early Monday that he would seek to stop any legislation raising the nation’s debt ceiling unless and until President Obama “in his role as the current, if illegitimate, head of the Union” presented the Junior Senator from Texas with papers “announcing the North’s immediate and unconditional surrender to the Confederacy.” Such documentation, the Senator argued would simply acknowledge “at long last” that the South “clearly and decisively” won the Civil War. Senator Cruz’s statement came at a time of already high tension in Washington as the nation entered its second week of a government shutdown forced by a committed cadre of House Republicans seeking to defund the Affordable Care Act.

Senator Cruz considers himself the spiritual father of the Tea Party lead shutdown and is unapologetic about the issue.  Indeed, his only regret seems to be not going further, faster.  “The truth is, we were aiming to low,” Cruz told Fox New’s Sean Hannity in an interview after his press conference. “We’re gonna win this thing … this shutdown thing … and we’re gonna go on to win on the debt ceiling. So I say: aim high, win big. And for me that means finally getting all this nonsense about the War Between The States settled once and for all.”

White House Spokesman Jay Carney was visibly flustered this afternoon when informed of Senator Cruz’s remarks during his regular press conference. “Let me say this one more time,” Carney said after a long moments pause, “the President has no intention of bargaining around the debt ceiling.”

“Furthermore, while I have not asked the President directly, I am fairly certain that this Administration has no intention of renegotiating General Lee’s surrender at Appomattox at the present time.”

Although several moderate voices in the Republican party — including Senators Susan Collins of Maine and John McCain of Arizona  — have spoken out against Senator Cruz’s goals and strategy, John Boehner (R-Ohio) appears to be conflicted on the matter.  Though originally expressing skepticism about the Texas Senator’s position, the House Majority Leader seemed to “walk back” his stance after an hour long meeting with members of the House Tea Party Caucus earlier this afternoon.

“Look,” Boehner stated to a gaggle of reporters upon leaving the meeting, “nobody wants to be here.  You don’t.  I don’t.  I certainly don’t want to risk the full faith and credit of the United States while arguing about who really won the Civil War. It’s not an ideal time or an ideal topic in my opinion.  However, after speaking with my members, they decided that this is the time to deal with this issue.  We’re just talking about people of good faith asking to sit down and talk.  That’s it.”

“I don’t know where we go from here.  But I’ll tell you one thing I know:  it is painfully obvious to everyone who is being unreasonable here.  We’re just asking for a conversation.  It’s the President who is saying that just talking about a possible surrender by the North is out of the question. Since when is being unwilling to negotiate the sane position? I think the good people of America know full well who is putting them at risk over silly goddamn games.”

This entry was posted in Also Inside, Breaking, Humor, TOP STORIES, Uncategorized. Bookmark the permalink.