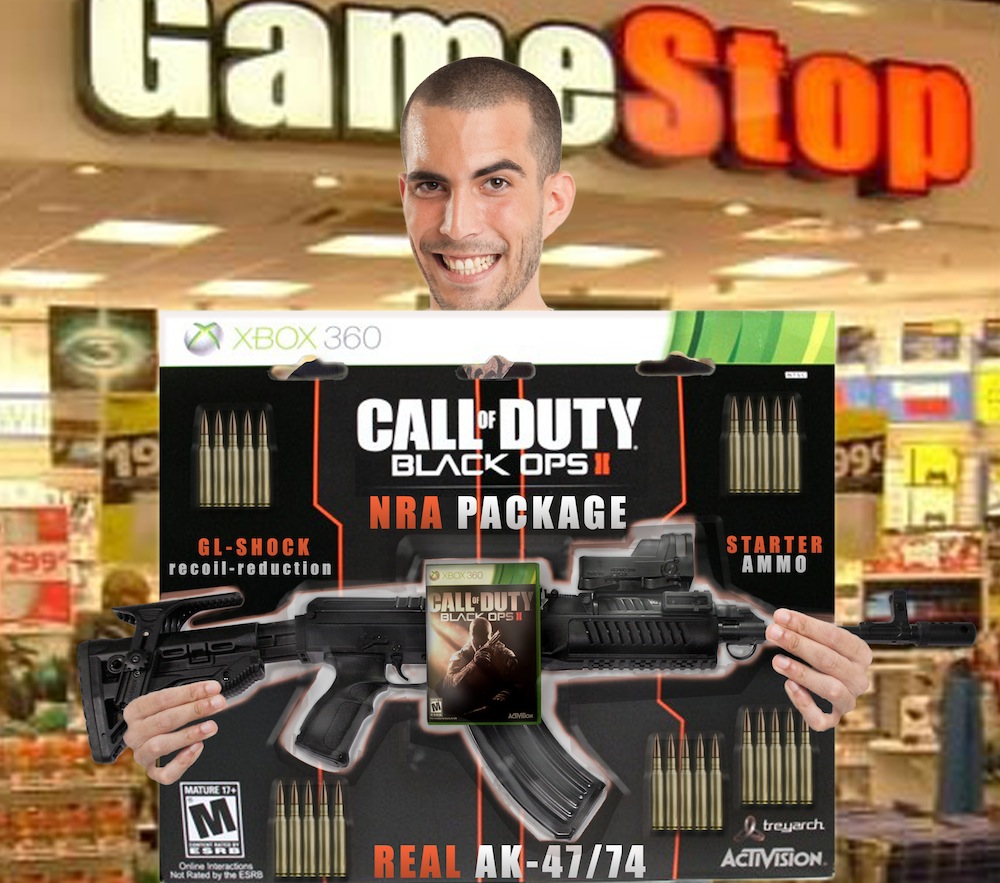 (LOS ANGELES, CA) – A new “Limited Edition” release of the monster hit video game “Call of Duty: Black Ops II” has raised lots of eyebrows — and not just within the gaming community.  While earlier releases of the Activision game have drawn some criticism for their graphic depictions of violence, the new “NRA DELUXE” release (offered in a partnership with the pro-gun organization) adds a new wrinkle to the discussion.  It ships along with a “collectable, semi-automatic Assault rifle” and 25 rounds of armor-piercing ammunition.

“It’s a pretty amazing deal for a collector’s edition,” said 19-year-old GameStop shopper Chip Pinkman (whose online handle is ‘Killdog49’), “I mean, sure you need to get a background check and all, but that’s an easier process than, like, signing up for Xbox Live with the game controller and that damn onscreen keyboard.  Anyway, it’s pretty rad.  Totally worth snapping up.”

U.S. Congressman Jay C. Smithwick, who introduced a bill calling for the study of violent video games in the wake of several recent mass shootings disagrees.  “Ever since this recent rash of killings with assault rifles began, I have been calling for the congress to look into the problem of video games,” the elder representative stated, “Even in the context of this recent move by Activision, I think it’s important that we keep our eye on our incredibly complex cultural problems and not just focus on the relatively clear-cut issue of not selling assault rifles in toy stores.  Would it be easy to pass a law to prevent weapons being sold like this: sure.  Would it really solve any long-term social problems: I’m not so certain.”

NRA CEO Wayne LaPierre stated Tuesday that, while he disagrees with the Congressman’s negative view of the NRA game pack itself, he has no basic argument with Smithwick’s take on video games in general: “The NRA stands firmly behind this partnership with Activision because we live in an imperfect world … If it were up to me, everyone would have a gun and nobody would have any video games.  That would be the sane thing.  But given the world we live in, one thing is clear: the only thing that will stop a bad kid with a video game is a good kid with a video game and a gun.”

Psychologist Bruno Jabowlski — who has been cited in several court cases by those seeking to curb or ban violent video games — had a different, but not entirely inconsistent, take: “I am just glad this packaging gimmick has drawn attention to the horrible Call of Duty game itself.  There is tremendous evidence that playing violent games correlates strongly with aggressive behavior.  If it takes handing out guns to make people pay attention to the dangers of video games, I say ‘bravo, Activision, bravo!’”

Activist and mother Sharon Handley, however, expressed a different point of view while shopping near her home in the Dallas, FT Worth area.  “Let me get this straight,” Handley said, pausing to balance her chortling one-year-old son on her hip as she spoke, “people are selling a package with a game and an assault rifle in it and politicians and psychologists are talking about the game part before getting the armor piercing rounds off toy store shelves?!?”

“I think we need a commission to study the connection between gun violence and the election of easily distracted morons.”

Activision CEO Eric Hirshberg could not be reached for comment.

This entry was posted in Also Inside, Breaking, Filter, Humor and tagged Call of Duy, gun control, NRA, video games. Bookmark the permalink.