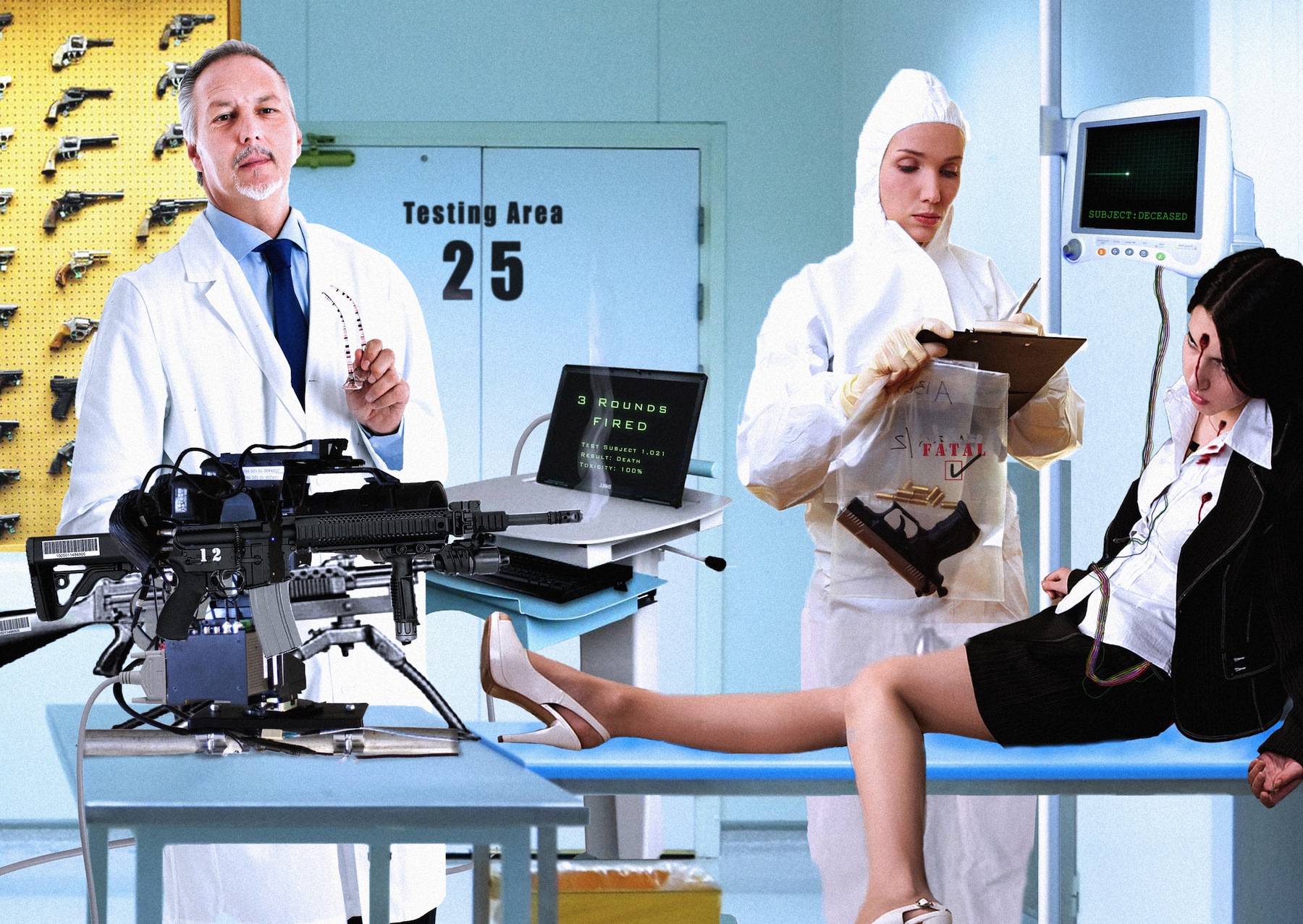 “I have no idea what these scientists in these laboratories are talking about, but I know one thing for sure:  guns don’t kill people, people kill people.”

Reached for comment in his office at the University of Chicago’s William Eckhardt Research Center, the study’s chief author —  Professor Benjamin Hutchinson — was cordial but solemn in responding to LaPierre’s criticism.   “I understand where the gentleman is coming from,” the Professor responded, “and frankly, he is half right.  Our findings do support the contention that people kill people.  However … and this is where we split ways … it also produced compelling evidence suggesting that guns also kill people.  Indeed — if our data is right, and I think it is, they seem to do so quite effectively.”

Asked to elaborate on his study’s origins, methodology and results, Hutchinson stated that in early 2012 he set out to test the NRA contention that guns do not kill people in exactly the same manner he would test any other substance for the presence or absence of “human toxicity.”  He embarked upon a double-blind study — introducing the purportedly dangerous element to one of two cohorts of test subjects, observed the results and recorded the findings.

“Basically, we hired a large group of students from the University of Chicago undergraduate community and offered them cash to be part of the study,” Hutchison explained, clearly trying to stick to layman’s terms in his description of the study in deference to reporters.  “We then called the volunteers into the lab individually and sent each into one of two rooms based upon a random selection process.  Those students selected to be actual ‘test subjects’ were sent to a room equipped with a computer-controlled, turret-mounted rifle, and those selected to be in the ‘control group’ were sent into a room that was identical in every way, but for the absence of the automated firearm.  As the study was ‘blind’ we informed neither the test subjects nor members of the control group as to why a gun was (or was not) present in their room.”

After aiming and firing the weapons in the relevant rooms several times, Hutchinson’s team quickly began amassing some very compelling evidence that guns do, in fact, kill people.

“We were, frankly, shocked at how black-and-white the data was,” Hutchison stated. “Members of the otherwise healthy cohorts who were not shot lived, and those shot in the head, heart, or other vital organs almost invariably died.  We screened for every other kind risk-factor imaginable and were very careful in our use of the control group.  In short, they only difference between the two cohorts of students was whether or not they had been shot by a gun at point blank range.  Those who had, tended to die at an alarming rate; those who didn’t almost invariably survived their time in our laboratory.”

“No matter how we dissected or finessed the data, we kept coming to the same conclusion: guns really seemed to be killing people.”

“Of course, we soon expanded our study beyond the campus community,” Hutchinson continued, “and found that guns seemed to kill regardless of race, gender, class, age, educational background, or religion.  Once we had the data necessary to make that assertion with confidence, we decided it was time to publish.” 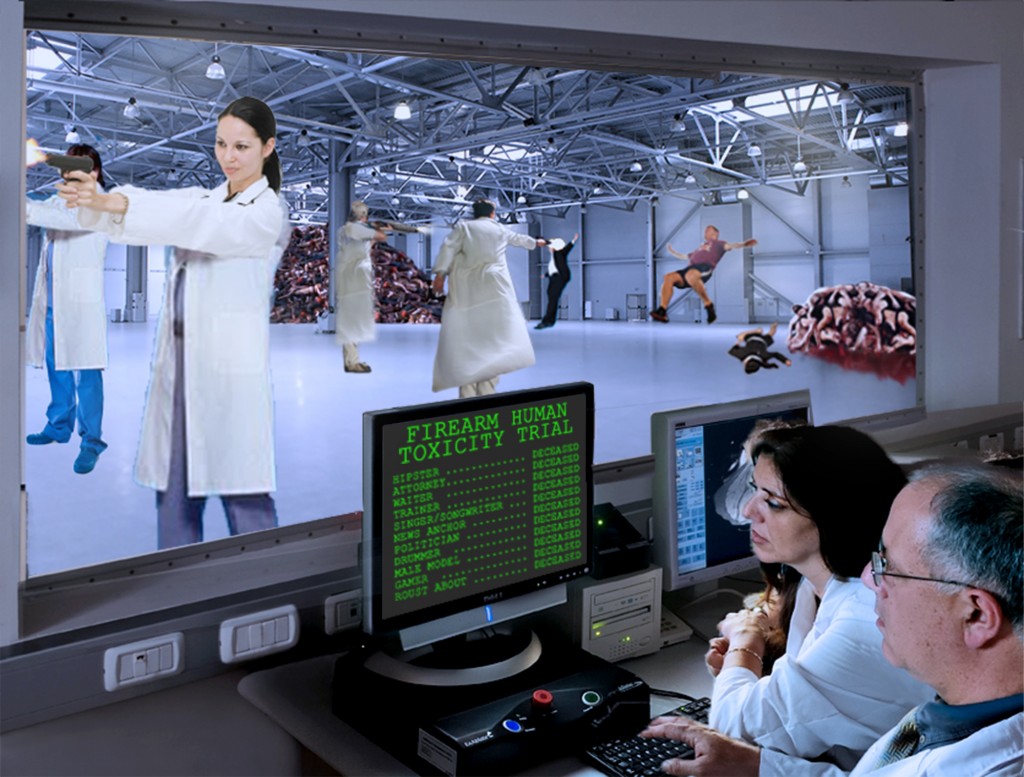 Expanded trials have resulted in a high, but necessary, body count.

But Hutchinson was quick to add that the publication of this initial study did not signal the end of his work in the field.  Responding to a question from New York Time’s reporter Amanda Meehan, the Professor noted that he is currently amassing data for another study that hoped would be ready for publication in the coming weeks. “Now that we know that both people and guns kill people, I am fascinated to explore the next logical question: whether or not guns help people kill people.  So, we have embarked on an exciting relatively novel study that I engineered with the help of my research assistants and staff. ”

“Basically, we are putting people who want to kill each other into identical controlled environments with our without a stockpile of loaded firearms.  We are then observing and recording the resulting homicide rates in rooms with and without the stockpiles at two, four and six hour increments.”

“I fully expected this kind of study to allow for far more subtle statistical analysis than our previous experiment; however, the early results are quite interesting.  While some percentage of both the ‘control’ and ‘test’ groups have chosen to engage in physical altercations, those placed in rooms stocked with loaded firearms seem to be far more likely to succeed in killing one of the two participants in relatively short order. This has proven to be the case whether the test subjects were two felons with a long-standing feud, the mothers of girls competing to make a cheerleading squad at a Texas high school, or even just recent divorcees from Vermont.”

Asked if this more recent study might impact current political discussions regarding expanded gun regulations, the Professor shrugged and offered, “That’s outside my area, and, frankly, until I have concluded the experiment and digested the data, I can offer no definitive scientific conclusion as to whether or not it is a good idea to keep guns away from homicidal individuals in certain situations.  I guess it’s up to the politicians in Washington to decide if they need to wait for my study before proceeding on that score.”