Perplexed Clarence Thomas Unsure Why He Can’t Get a Cab 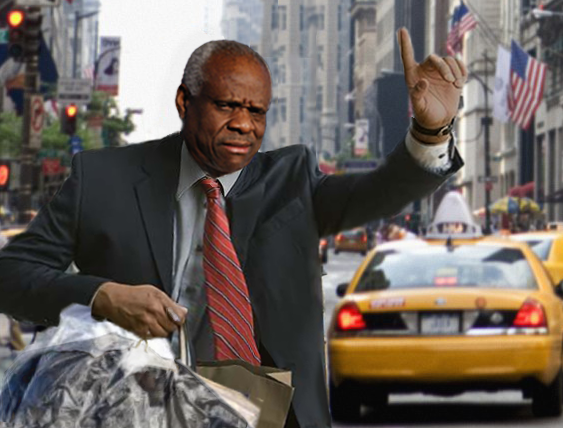 (WASHINGTON, DC) – Clarence Thomas has confirmed reports circulating today that the Supreme Court Justice had an inexplicably difficult time hailing a cab in Southeast D.C. late this afternoon.  The Justice, who has held prestigious and high paying leadership positions for the last several decades, had not attempted to flag down a cab in at least thirty years as he is usually transported to and from work by a limousine service or — occasionally — private helicopter.

“I guess I really just don’t remember what it’s like to hail a cab or how to do it; that’s the only explanation I currently have.”  The frustrated Justice said that he looked to others as a guide to determine if there was “some new custom or practice” with regard to getting the attention of cab drivers.

“I actually saw my former clerk Tad Worthington hail a cab with no problem across the street and then watched carefully as one of the court secretaries —Abigail Goldstein-Farber — did the same.  They got cabs right away but whatever they were doing was very subtle.  I think it might be in the wrist. But my goodness, does it seem I’m not good at picking up on this one.”

Luckily for Justice Thomas, Justice Antonin Scalia happened by after “about three quarters of an hour” and asked if he could help.  “I think it’s that he’s from Queens, but that man clearly knows how to hail a cab,” stated Thomas, himself from Altanta, GA.  “Sometimes I underestimate how important different life experiences can be in shaping a person.”  Laughing he concluded, “Nino got me a ride in moments.  I’d like to get better at this whole thing myself, but if I don’t I’ll just ask Scalia for help quicker next time.”

“I mean, at the end of the day, as long as I have a ride, the rest of it just isn’t all that important.”