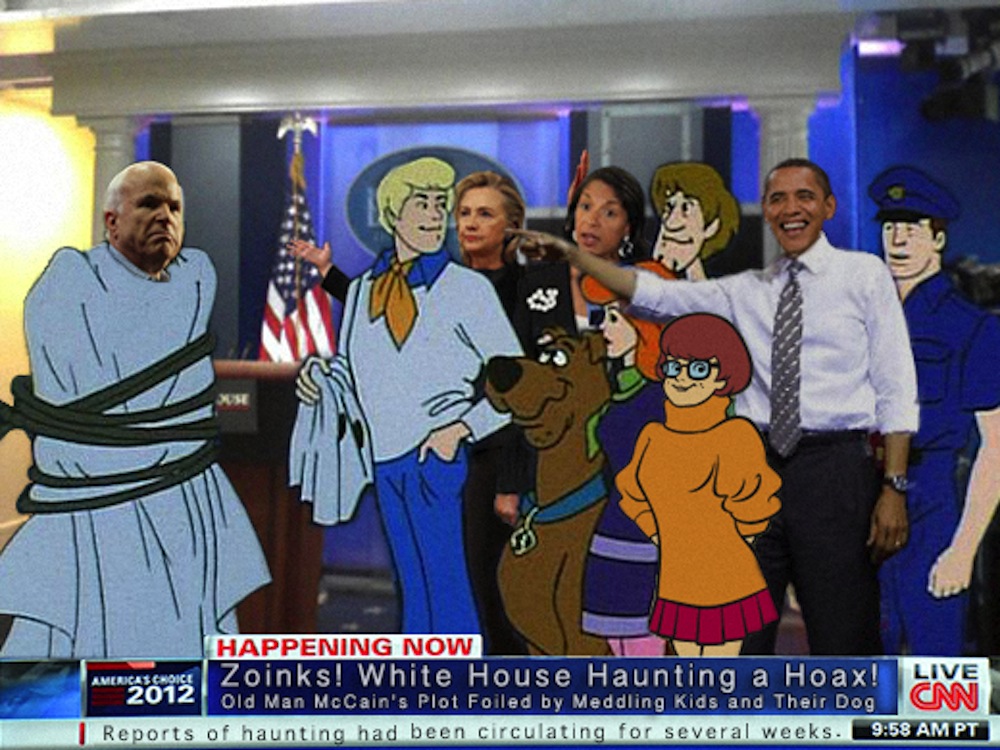 (WASHINGTON, DC) –  An unusually raucous and animated White House press conference today ended with the revelation that spooky events surrounding the now infamous “Curse of the Benghazi Ghost” were not legitimate paranormal happenings, as previously thought, but rather a fraud perpetrated by Senator John “Old Man” McCain as part of a scheme to advance his own political agenda.

For several weeks, the White House has been dogged by unsubstantiated but relentless rumors about its nefarious role in politicizing the tragedy at the US embassy in Benghazi.  Critics, however, had gained little traction until word began to spread that the ghost of Ambassador Chris Stevens was literally haunting the halls of Congress moaning vague accusations about manipulated intelligence and the culpability of UN Ambassador Susan Rice regarding her appearance on Sunday Morning Talk Shows in the wake of Ambassador Stevens’s brutal murder.  “Don’t worry about me being dead,” the ghost was reported to intone time and time again, “Susan Rice is the story here!”

Much to the White House’s chagrin, talk of the haunting was really hurting business.  “Once that ghost thing really got going,” said White House groundskeeper Dale Haney, “it was impossible to get things done at all in Washington … I was worried we were gonna just have to shut this whole place down.”

Luckily for Haney and the Obama administration, however, things took an unexpected turn a few days ago when a group of homeless, itinerant teens and a dog traveling in a colorful van took a wrong turn and ended up in D.C. on a dark and stormy night.  “It really was just happenstance, nothing remarkable,” stated a diminutive and nerdy Velma Dinkley when asked how the gang came to stay at the White House, “it was rainy and dark and spooky that night and we needed a place to stay.  Old groundskeeper Haney was nice enough to give us a room.  And that’s when he warned us about the ‘Curse of the Benghazi ghost.’”

Anything but frightened by the warning, the leaders of the gang — Fred Jones, Daphne Blake and the aforementioned Velma Dinkley — convinced a somewhat rattled Shaggy Rogers and dog Scooby Doo to investigate.  “It took two scooby snacks,” Fred stated, “but we got Scooby to come along.”

From there things fell into place rather quickly when the gang found a series of wires leading between an old reel-to-reel tape player and a string of speakers hidden throughout the White House.  “The tape had all sorts of wacky messages on it in a spoooktastic voice, man!” intoned a somewhat jittery Shaggy Rogers, “stuff like ‘forgeeeeet about the actual terrorist eveeeeeent’ and like ‘investigate the sunday talk shows.’ It was, like, wild!”

From the determination that there was a scientific explanation for the ghostly voice  haunting the White House halls, it was quickly obvious to the gang who was responsible for the hoax.

“Sure from there it was all obvious,” stated the tall, blonde, clearly self-appointed leader of the gang Fred Jones, “but Velma’s the one who put the pieces together first.”

Blushing, Velma nodded, “Ah shucks!  It didn’t take a rocket scientist to figure this one out!  That grumpy Ole’ Man McCain was already saying so many ridiculous things about the White House, it was plain to see that he was the one behind this caper!  I’m just glad a couple of Scooby Snacks was all it took to get old Scooby Doo to act as bait for that scary ghost!  We got it to chase Scoobs into the White House press room and Fred just ripped his mask right off to show the ghost was really just cranky Ole’ Man McCain.  After that, we explained the whole thing to the President, and he laughed and thanked us for our help.  It was great.  A really satisfying conclusion.”

In the end, then, the specter of a Benghazi scandal — which has gotten so much press in recent weeks — turned out to be nothing more than a bunch of ridiculous theatrics perpetrated by a frustrated old man.  “I would have gotten away with it too if it hadn’t been for that dog and those meddling kids,” Senator McCain was heard complaining as he was hauled away to prison, “it’s not as if the media would have ever caught on!”

At the time of publication, neither Scrappy Doo nor Ambassador Susan Rice could be reached for comment.