JACKSON, MS — New Mississippi legislation requiring residents to confirm they have never seen a Tyler Perry movie before being allowed to vote has come under heavy fire from civil rights groups all over the state this week.  Several days of testimony concerning the law are expected to begin Monday in separate federal cases initiated by the Southern Poverty Law Center, the ACLU, and Lionsgate Entertainment.  Each lawsuit seeks to enjoin enforcement of the legislation on slightly different rationales. 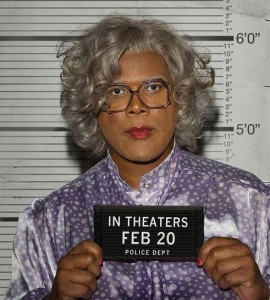 Do White People Know Who This Is?

Jarrett Greene, attorney for the Southern Poverty Law Center, states that the case is fairly straightforward:  “there is simply no argument whatsoever for singling out entertainment popular in the Black community and using it as a means by which  to suppress voting rights.  I mean, seriously.”

Republican State Senator Lee Braxton Clementine III disagrees.  “Simply put,” Clementine told the Associated Press, “these films are nothing but a blueprint for identity falsification and voter fraud; I am made to understand that this Perry individual pretends to be multiple people in any number of films and has even created a female persona that has both gone to jail and successfully infiltrated the federal witness relocation program. People who have seen these films are clearly suspect.”

Avi Blumenthal, of the ACLU, however, calls this argument a “fig leaf” for covering racial animus.  “Look,” a harried Blumenthal said when reached for comment, “I haven’t seen these movies myself — I mean, obviously I haven’t — but I understand they’re just silly flicks that Black people like for whatever reason.”

As Blumenthal indicates, it does seem clear that the vast majority of viewers of Tyler Perry films are, indeed, African American.  According to a recent study performed by the Neilson ratings agency, 99.9% of the audience for Perry’s famous Madea films is non-White.  The 0.1% of white viewers is largely explained by the significant number of white projectionists working in America today.

In spite of these stark demographic statistics, however, Senator Clementine is adamant that any disparate racial impact of the new legislation is totally coincidental.  “You must understand,” Clementine stated, “we’re just trying to protect the sanctity of the voting process here; it’s not like these people will be totally disenfranchised — they’ll be allowed to fill out special provisional ballots that will be collected and hopefully saved for consideration later at some point or other … if that’s needed for some reason.”

Tyler Perry could not be reached for comment at the time of this article’s publication.