The RNC Has a Dream 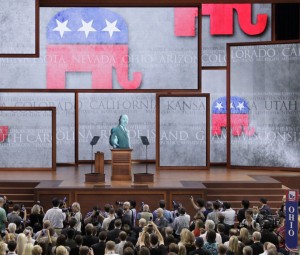 On this day in 1963, Dr. Martin Luther King Jr delivered his historic “I Have a Dream” speech to more than 200,000 people gathered for the Civil Rights March in Washington, DC.  Tonight at the Republican National Convention, Ann Romney is expected to match Dr. King’s stirring, inspiring, once-in-a-generation message with her highly anticipated “I Swear My Husband Isn’t a Heartless Robot” address.

However, inside sources have have informed Citizen Schwartz that the “surprise speaker” slated to address the GOP Thursday night promises to outshine even Mrs. Romney’s remarkable, soaring oratory.

That surprise speaker is rumored to be Dr. King himself.

The same technical wizardry used to resurrect rapper Tupac Shakur at the popular music and cultural event known as  “Coachella,” it seems, will allow the great civil rights leader to address the GOP from beyond the veil.  Excerpts from his holographic remarks — an updated version of his famous speech tailored to the message of the RNC — has been leaked to Citizen Schwartz and is reprinted below.

“I Have a Republican Dream”

[… As Hologram-Republican-Dr. King approaches the stage,  the stunned crowd falls silent.  Many are shocked to see a dead man approach the podium; even more to see a black man.  Dr. King begins to speak: ]

I am happy to join with you today in what will go down in history as the greatest demonstration for freedom in the history of our nation.

Some score years ago, a great American, in whose symbolic shadow we stand today, signed an Emancipation Proclamation.  I am speaking of course of Ronald Reagan whose leadership freed us from the bonds of the air traffic controller’s union and single-handedly crushed both Granada and the evil Soviet empire, guaranteeing the survival of our way of life.

… But all these years later, we are still not free.  The life of the Republican American is still sadly crippled by the manacles of unionization, the horror of Obamacare and the specter that, any day, the death tax might be reinstated.

… In a very real sense, you see, we’ve come to Florida today to cash a check.  Not one found in the Constitution or the Declaration of Independence.  Those are great documents to be sure, but the check I speak of is huge and quite literal.  You know what I’m talking about, right … yeah you do ….

… But, seriously now, all kidding aside … I am not unmindful that some of you have come here out of great trials and tribulations. Some of you have come fresh from the border where you stand vigilant against the intruding mexican menace.   Some from areas decimated by Solyndra.  And even more from homes where you watch as your nuptial vows gasp for virtuous air — barely surviving the constant struggle against the invisible corruptive force that is Gay Marriage.

But, despite these loathsome, Europeanesque depravities, let us not wallow in the valley of despair, I say to you today, my friends. And so even though we face the difficulties of today and tomorrow and the horrible threat to our liberty posed by Sharia law — I still have a dream.  It is a dream deeply rooted in the Republican American dream.

I have a dream that one day this nation will rise up and live out the true meaning of its creed: “We hold these truths to be self-evident, that … the right of the people to keep and bear Arms, shall not be infringed”

I have a dream that one day on the red hills of Georgia, the tax breaks given to the mega-wealthy will be allowed to trickle down to the sons of former slaves.

I have a dream that my four little children will one day live in a nation where they will not be forced to be judged by the color of their skin, but rather the content of their bank account!

I have a dream that someday we will not awake at night with nightmares of a 15% capital gains tax, but will be assured our unearned income will not be taxed at all!

I have a dream that one day every rich man will walk through that biblical eye of that biblical needle and enter a heaven in which they will meet Ayn Rand and shake her glorious hand! …

I have a dream that soon we all will accept the simple notion that everything good is built only by the individual wholly out of selfish motive!  And then, my friends, we shall we be truly free!  Only then will we truly be free at last!

For, ladies and gentleman, I have been to the mountain top.

Yes, indeed, I have been to the mountain top!

And I have only one thing to say about it:

Thank you.  And good night!

[… Hologram, Republican Dr. King begins to flicker and turns to a kneeling position.  He then returns to a standing position and, still flickering, states, “Help me Obi Wan Kenobi, You’re my only hope.”  He then vanishes. ]