US Seeks International Sanctions Against Producers of “Movie 43″ 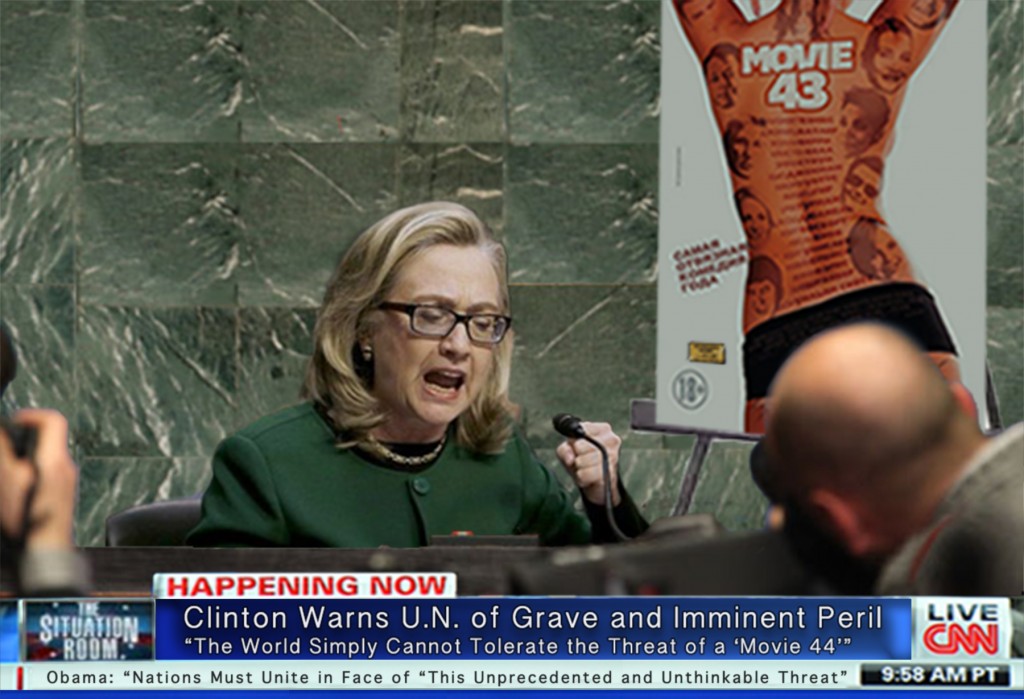 CLINTON TELLS U.N. “WORLD CANNOT LIVE UNDER THE LOOMING THREAT OF A ‘MOVIE 44‘”

(NEW YORK, NEW YORK) In perhaps her last official act as Secretary of State, Hilary Clinton appeared before the U.N. Security Council today and passionately pressed the case for embargoes, sanctions, and the possible use of force against Relativity Media LLC in response to its release of the critically and popularly reviled film “Movie 43.”  The Secretary also named producers Charles B. Wessler and the infamous Farrelly Brothers as parties to the “unspeakable act.”

Armed with reports from Rotten Tomatoes [dot com], statistics from the Center for Disease control, a flotilla of anecdotal evidence, and clips from the film itself — Secretary Clinton told the world that the creation and dissemination of Movie 43 was an obvious crime against humanity and a clear violation of international law.  Further, she argued, inaction by the international community could invite the unthinkable: more of the same.

“Simply put, the world cannot suffer to live under the threat of a possible ‘Movie 44’,” Clinton stated — rhythmically slamming her fist on her desk for emphasis as she spoke, “No child should be raised under the cloud of fear, uncertainty and sadness that such a threat creates.”

“Anyone who saw footage of moviegoers emerging from theaters during this last week would understand that.  Anyone who read the reviews would feel it in their bones.  And anyone who actually saw the film will never be the same.  Certainly, as many others have indicated before me, we must provide for these damaged souls, but we must do more!  We must say to them ‘Never again!  We will never let this happen again!’  And if we don’t act, it will!”

Clinton continued her testimony by sharing a grim, incontrovertible fact: in spite of the reviews and the horrible word of mouth, Movie 43 is turning a profit.  The incredibly cheap, star-studded production cost the studio only $6 million to make and has already taken in $8 million dollars world-wide.

Clinton punctuated her emotional testimony by asking all non-critical personnel to leave the chamber, handing out air sickness bags to those who remained, and showing selected minutes from the film on monitors throughout the hall.  “It was just shocking,” stated Rwandan Foreign Affairs Minister Ms. Louise Mushikiwabo, “There was human cruelty, emotional abuse, genital mutilation, pedophilia, incest, people forced to endure being defecated upon, and — inexplicably — a full fifteen minute sketch in which the only joke was Hugh Jackman having a realistic scrotum dangling from his face.  You can’t un-see these things.  I am forever changed.”

** EDITORS NOTE:  Although the Farrelly brothers could not be reached for comment at the time of publication, they have responded to the criticism of the film via twitter with language that would seem to address the expected UN resolution:   “To the critics: Movie 43 is not the end of the world. It’s just a $6-million movie … Now back off.”  **

This entry was posted in Also Inside, Breaking, Filter, Humor and tagged Clinton, movie 43, UN, United Nations. Bookmark the permalink.