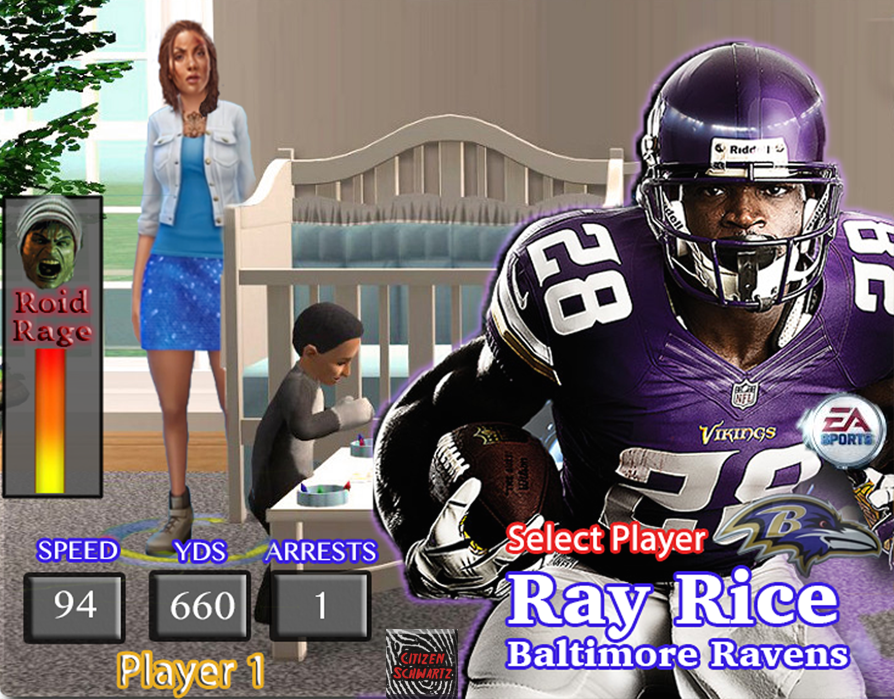 (Los Angeles)  The Sports division of Electronic Arts is no stranger to controversy but it seems to have wandered into a particularly dangerous minefield with its latest update to the wildly popular football simulator franchise “Madden NFL.”

The game patch, aimed at providing a more realistic depiction of the NFL experience, includes a mini-game in which players commit acts of domestic violence and must avoid cameras and witnesses or risk short term suspensions.  In executive mode, such transgressions must be quickly covered up.

“Listen,” said EA Sports President Zack McAllen, “we promise our customers and fans that ‘if it’s in THE game, it’s in OUR game.’  Quite frankly, anybody who hasn’t come to the conclusion that domestic violence is part of the NFL game in recent weeks is either very slow or living under a rock.”

If fact, sources inside EA have reported that developing the new aspect of the simulator was not a very major challenge.  “It’s not like we had to simulate a complex interaction here or turn something taken seriously into entertainment.  The NFL already treats covering up domestic violence like a game, so we just adopted their attitude in designing our role play.  Seriously, they really did the work of turning it into a game for us.”

The EA game can be played in several modes — a video gamer may play as either an athlete committing acts of violence himself or choose from any number of executives, lawyers and fixers who are tasked with hiding the incidents and issuing the minimal possible penalties allowing for players to continue performing for the benefit of the ownership.  The highest difficultly level on the “business side” of the game comes in the form of a “commissioner mode.”

“We’ve gotten a number of complaints that the commissioner mode is too hard with so many coverups to handle at once,” stated McAllen, “but generally our players like a challenge.  If we need to release a patch that provides a less-realistic ‘easy’ setting in which the commissioner is not constantly lying and strategizing … Well, we’ll cross that bridge when we come to it.”

As for the gaming community, the reaction has been remarkably mixed.  Some players seem enthusiastic but many find the inclusion of the mini-game shocking, troubling and distasteful.  Nevertheless, one noted feminist critic sees a silver lining in this case: “Usually I would hate this kind of horrifying misogyny,” said FemiGame Magazine founder Adrienne Shiner, “but here I feel like the gaming jerks are shining a light on how awful the football jerks really are.  So maybe that’s okay?  I don’t know.  I kinda hate everyone. I mean, that’s not abnormal … but today?  Today, everyone can really just go sit and spin”

For his part, gamer Josh Bevington of Freeport, Wisonsin doesn’t have any problem with the game.  “Hey, I’ve been beating up prostitutes and strippers in the Grand Theft Auto games for years. And that stuff rocks. If there’s a difference here I can’t see it.  I can’t see it at all.”

NFL Commissioner Roger Goodell could not be reached for comment.