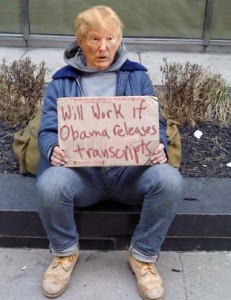 (AUBURN, MI)  Reporters getting an exclusive look through the newly developed “Alternate Universe Window” created by Dow Corning Labs today have reported that it in every universe surveyed, Donald Trump seems to be an insufferable, narcissistic douchebag — just as in our own reality.

The Dow Corning device (also called the “Many Worlds Viewer” by some) is  a 6’ x 6’ frame that uses tachyons and decaying neutron fields to generate a thinning in the fabric of space time — allowing viewers standing on one side of the “window” to view a crystal clear image of another universe.

“At this point we don’t know how or why the window ‘selects’ which parts of other universes to display,” one scientist at Dow stated, “But for some reason, it has shown us a lot of Donald Trump in each universe we’ve been able to view, and the guy is always a total douche.”

In particular, the window seems to have settled on one alternative world in which Donald Trump — far from being a billionaire — is an abrasive homeless man, whose ranting and raving goes largely unnoticed but for the other homeless people living in his immediate vicinity.  Those unfortunate souls seem mildly annoyed by the ranting Trump but take little mind of the man and do their best to steer clear.

“It’s kinda funny to see,” said one invited reporter, “he’s doing exactly the same crap over there in that universe but nobody cares at all: He rants all day long about stuff he knows nothing about and tells other homeless people they’re losers because they don’t have a ‘super classy box palace’ like his.” 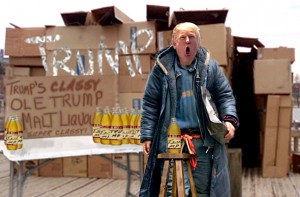 “And the thing is,” interrupted another journalist, “he just moved into that box-house when some other homeless guy died.  He just slapped this huge silver-foil ‘TRUMP’ on it and started screaming about how classy ‘Trump Palaces’ are and what an entrepreneur he was for building it.  It’d be hysterical if it weren’t kinda sad, ya know?  Cause, except from being homeless and ignored, he’s just exactly the same guy.”

Indeed, the surface differences and substantive similarities between Trump in this world and others has not gone unnoticed by the scientific community; it has, in fact, allowed researchers to draw some very interesting conclusions about the nature of the multiverse itself.

“The substantial sameness of the various Trumps is fascinating,” stated theoretical physicist Pierre Mandelbrot, “it seems that the closer other universes are to our own, the more similar the worlds are to ours in terms of relevant facts.  This ‘Homeless Trump World’ — or ‘HTW’ as we have come to call it — must be one of the nearest to our own as it takes the least energy to view.   In it, Trump is basically the same man.  We have been able to generate power spikes long enough to give us very, very brief glimpses into other universes in which Mr. Trump is a loud-mouthed cab driver, an annoying rodeo clown, an aggressive used car salesman, and even an obnoxious professional wrestler called ‘Mr. Classy Boss.’  However, we have been unable to maintain those viewings for more than a few seconds before losing power.  It just takes too much juice.”

Wrestler “Mr. Classy Boss” (A Disturbing View Into an Even More Distant “Douchiverse”)

Asked if there might be an existing world in which Donald Trump was actually worth listening to, Mandelbrot considered before stating hesitantly, “Theoretically, yes.  This must exist if one posits infinite universes; however, the amount of power it would take to view such a distant universe is incomprehensible.  Perhaps that of a collapsing star — a Red Supergiant or maybe two.  But that’s just off the top of my head; I obviously have not performed such speculative computations.”

Regardless of the precise measures and calculations, however, one thing seems beyond dispute: the human race will never see a Donald Trump who is not an insufferable douche who ought to be ignored.

“What can I say?” Mandelbrot concluded, “There are some things even the most advanced science cannot achieve.  What you ask for, I fear, is beyond imagination.”

This entry was posted in Also Inside, Breaking, Filter, Humor, TOP STORIES. Bookmark the permalink.