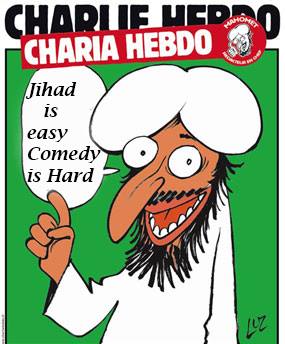 Upcoming Title Change to “The Prophet” In the Works

The Prophet Muhammad has agreed to take over the editor-in-chief position at Citizen Schwartz for a stint that will last as long as the prophet would like. In honor of his stint as editor, Citizen Schwartz will change it’s name and will now be referred to simply as THE PROPHET.

Asked why he was assuming editorial duties at the small web publication, the Prophet responded that he wanted to “demonstrate to his less intelligent followers that jihad is easy but comedy is hard.”  He then added: “Je Suis Charlie”

**NOTE: The image used here is, for obvious reasons, taken directly from the publication Charlie Hebdo. Only the “caption” has been changed. The Citizen/Prophet claims no rights to the image. And if there were any money to be made from the posting, it would be sent to the families of those who lost loved ones in the recent insane attack. Everyone, everywhere should be publishing this picture today. Let’s see some larger institutions take a stand as well.

This entry was posted in Also Inside, Breaking, Filter, Humor, TOP STORIES, Uncategorized and tagged Satire. Bookmark the permalink.