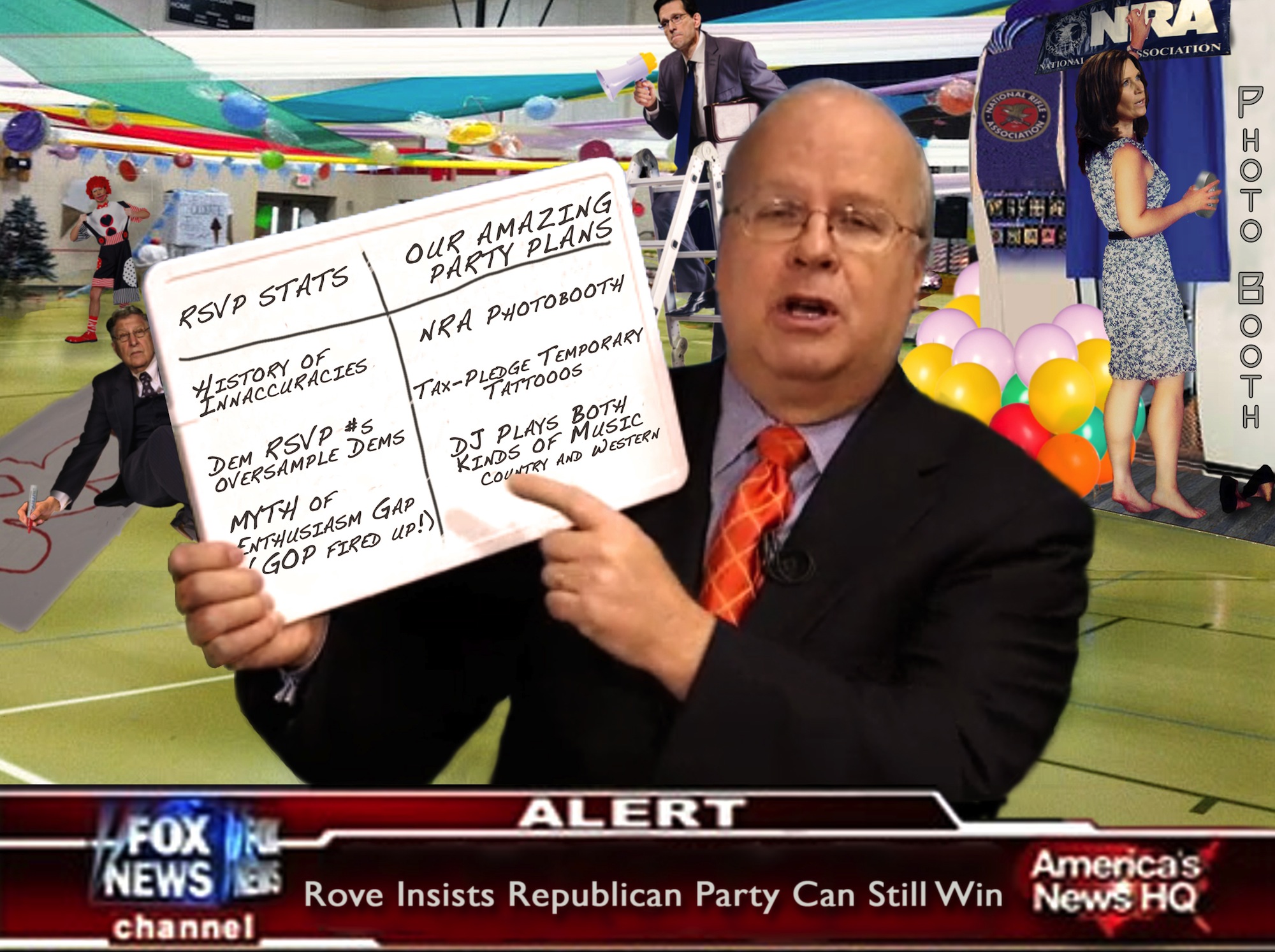 (WASHINGTON, D.C.) With President Barack Obama’s Second Inauguration less than a week away — and over ten days filled with official celebrations fast approaching — Democrats in D.C. are buzzing with excitement about the upcoming January calendar. However, while most observers see Democratic enthusiasm as a healthy and expected outgrowth of winning the election, some – like Republican strategist Karl Rove – see something else: arrogant complacency.

Speaking to Fox News’ Megyn Kelly from the gymnasium of St. Josephina the Divine Middle School today, Rove expressed frustration with ongoing media coverage of inauguration week 2013: “Look — the Democrats and the mainstream media are clearly creating a narrative here that favors their party. Sure they’re having major events. But let me tell you something, we in the GOP are having our own party right here — in this very gym — on January 20th. Everyone’s chipping in, and I fully expect it to outperform every single Democratic celebration on that day.”

On this point, a surprised Megyn Kelly pushed back a bit, noting that Fox’s own analysis of the numbers suggested that Democratic RSVPs looked fairly robust, and, further, that no one at Fox had even heard about Rove’s event until he called in to request network time a little over an hour before the interview.

“First off, we couldn’t report on the location until now because we were just able to secure this lovely gymnasium, Megyn,” Rove responded, “But, second, and more importantly, I’m sad to see you falling into the ‘drive-by media’ trap when you look at those numbers.”

With that, Rove pulled out his famed white board and began explaining the “simple math” behind his belief that the GOP’s “We’ll Get Them Next Time” Gala would outperform Obama’s events. Pointing to “gross oversampling” of Democrats in all RSVP tabulations to date, Rove highlighted historic inaccuracies in RSVP-based predictions and finished by noting that data provided by “Unskewed Party Planners dot Com” (and several notable Think Tanks) confirmed his analysis.

“In short, I’ve seen the numbers. The real numbers. I’ve analyzed them. And I have no doubt we are going to win this thing. Big.”

Rove didn’t stop there, however, adding that the Republican gala’s attractions alone were enough to guarantee an unprecedented turn-out. “I don’t need to analyze numbers to know which party people are going to want to attend,” Rove stated with a grin, “We’ve put Eric Cantor and his mom in charge of planning, and I’ll tell you what: the things they learned planning his Bar Mitzvah are really coming to the fore. We’ve got celebrities; we have a DJ; we have ‘Grover Norquist temporary tax-pledge tattoos’; we have an NRA Photo Booth … I mean, we have it all. You just can’t believe the kind of down-in-the-trenches effort we’re getting from everyone in the party.”

Indeed, as Rove’s interview proceeded, various GOP stalwarts worked tirelessly behind him to prepare the gym for festivities — with Republican notables like John Sununu and Michelle Bachman creating banners, hanging streamers and blowing up balloons. According to individuals close to the matter, this kind of direct, hands-on participation has proven necessary both because the majority of caterers, decorator and party planners in DC are otherwise engaged, as well as the fact that Grover Norquist refused to support any of the revenue-raising initiatives suggested by the GOP’s party committee.

Whether or not the Republican efforts pay off with big crowds remains uncertain. However, one thing is clear: a significant proportion of GOP planners remain utterly unfazed by the election of Barack Obama and uninterested in being shown numbers that suggest there is any problem with their party.

“All we have to do is advertise it better,” a smiling John Sununu stated, “I mean, the party is perfect. We couldn’t do anything better. Trust me on this: everyone will come around so long as we package it right.”

New York Times’ poll analyst Nate Silver could not be reached for comment at the time of this article’s publication.