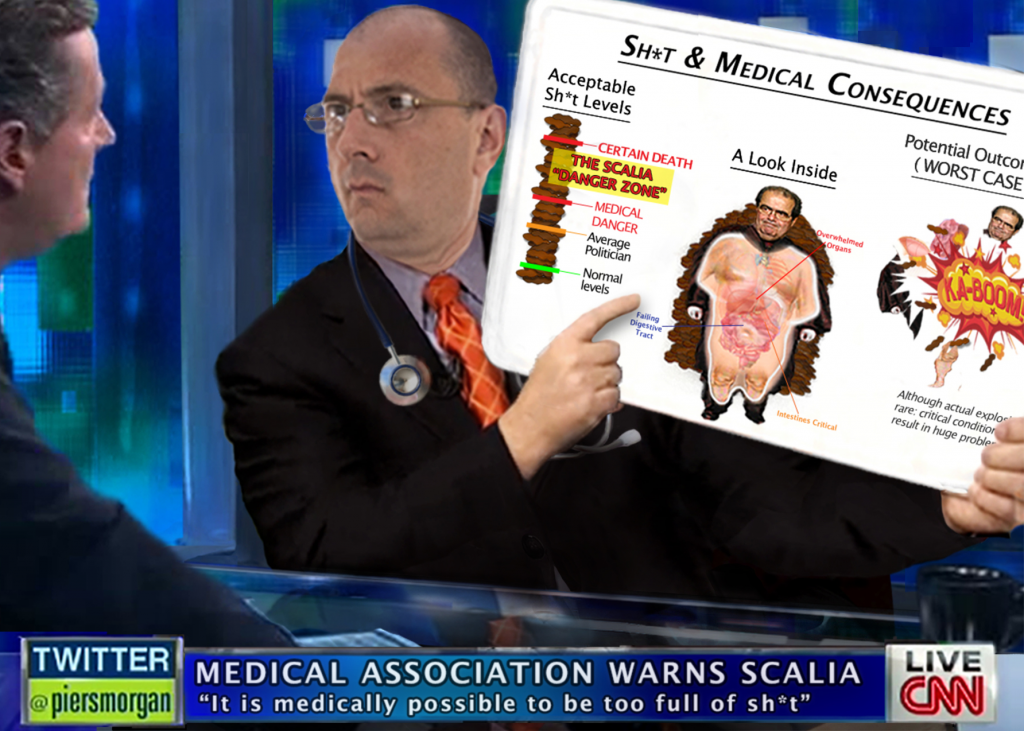 WASHINGTON, D.C. (CSN) – Antonin Scalia is quite accustomed to his judicial decisions and legal writings generating sharp criticism and voluminous commentary.  Indeed, colleagues and commentators alike have long suggested that the often combative Justice takes great pleasure in enraging his detractors and brushing off their complaints with a sharply worded barb and self-satisfied chuckle.

One medical expert, however, has a message for the Justice that appears to be no laughing matter.

“I’m more than concerned; I’m deeply worried,”  Dr. Benjamin D. Leadbetter told Piers Morgan on CNN Thursday night, “Quite simply the Justice’s recent writings and pronouncements from the bench clearly indicate that he that he is dangerously and alarmingly full of sh*t.”

Dr. Leadbetter, the current President of the Association of American Gastroenterologists, insisted he was speaking neither colloquially nor without due consideration.

“This is a medical matter of tremendous moment.  Bowel obstructions, Intestinal Volvulus, Paralytic Ileus and other conditions that result in being perilously full of sh*t are not to be taken lightly.  I would not have come forward at this time if the evidence weren’t so compelling and the implications so distressing.  Simply put, I felt I had to try to reach out to the Justice before it was too late.”

Indeed, Leadbetter indicated that he had been concerned about Scalia for many years but had refrained for public comment, assuming that the Justice must be under the care of competent physicians who would take care of the problem.

“Look, anyone who claims to be an ‘Originalist’ in reading the constitution has got to be red-flagged as a possible bowel obstruction case,” the Doctor stated.  “You simply can’t pretend to interpret a document like the constitution based upon such an inflexible and simplistic philosophy without being just a little bit full of sh*t, medically speaking.”

“However, that level of BFS (or Being Full of Sh*t) symptomatology certainly wasn’t sufficient to merit intervention on my part.”

Asked what turned the tide and convinced the Doctor to publicly reach out to the Justice with his concerns,  Leadbetter pointed to recent statements Scalia has made from the bench in combination with his vote to invalidate section four of the Voting Rights Act and his vituperative dissent in US v. Windsor (the case in which a majority of the court found DOMA unconstitutional).

“I think things really started to turn a corner for me during oral argument on the Voting Rights Act when Scalia announced that the court might have step in and overturn the law because it constituted a ‘racial entitlement’ with which Congress and ‘the normal political process’ were incompetent to deal.  I mean, here’s Antonin ‘Judicial Restraint’ Scalia proclaiming a novel theory concerning a whole newly designated class of laws that demand judicial intervention simply because he’s decided they are just too tricky for elected representatives!” 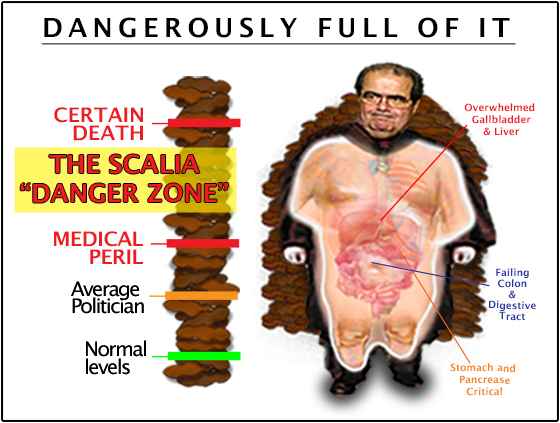 “And keep in mind,” the Doctor continued, “he’s an ‘Originalist,’ …  So surely he pointed to a specific Constitutional clause or amendment that was specifically adopted in order to grant the courts such extraordinary powers to overturn laws in this area, right?  Right?!”

“Of course he did not.  Because he is incredibly, dangerously and almost inconceivably full of shi*t.  I honestly do not know how the man is still walking around.”

At this point in the interview, a pensive and grave Piers Morgan pointed out to the Doctor that it had been many months since the Justice made the ‘racial entitlements’ comment from the bench.  “Why the wait?” he inquired.

Leadbetter responded that, though he had been deeply concerned at the time of the statements, he still wasn’t certain that it was time to take the extraordinary step of speaking out in a professional capacity, particularly given his position as the President of the Association of American Gastroenterologists.

“Again, I had to assume that Scalia had physicians of his own and any position I take in public reflects upon the AAG as a whole. You have to understand, Gastroenterologists in general are a cautious breed, and I would never speak out in such a public forum without first addressing my concerns to the association’s board and having a vote on the matter.”

The Doctor was finally persuaded to do just that when he read the Justice’s dissent in the DOMA case after learning that Scalia did, indeed, vote to invalidate the Voting Rights Act.

“Trust me, at that point my differential diagnosis was complete.  I’d say it was textbook presentation of acute BFS, but Scalia’s symptoms suggest a level of Being Full of Sh*t that goes far, far beyond any textbook case I’ve ever seen.”

“So, feeling I had no choice at that point, I called an emergency board meeting and  presented my case.  I discussed my diagnosis generally and, in specific, Scalia’s stand on the Voting Rights Act and DOMA.  I then read aloud the passages from the Windsor dissent in which the Justice accused the majority of a ‘jaw-dropping … assertion of judicial supremacy over the people’s Representatives’ as the Court simply has ‘no power under the Constitution to invalidate … democratically adopted legislation.’”

Apparently that reading did the trick.

“Frankly, I’ve never seen so many physicians agree on a differential diagnosis in my life.  It was unanimous: Totally, Utterly, Acutely and Unquestionably Full of Sh*t.  Furthermore, everyone in the room was in full agreement that Scalia must be told he is obviously and dangerously Full of Sh*t as soon and as often as possible.”

“So, here I am, reaching out to Justice Scalia on CNN.  I only hope he hears this warning and takes it to heart.”

In closing the interview, Morgan and Leadbetter discussed the outlook for Justice Scalia given the consensus judgement of the Gastroenterological community.  The Doctor explained that numerous treatment alternatives were possible and the prognosis was likely good, though he could not say for sure whether the Justice’s BFS was causing his bizarre judicial hypocrisy or rather his bizarre judicial antics were somehow resulting in a heretofore unknown variant of Intestinal Volvulus or Paralytic Ileus.

“In any event, and regardless of causation,” the Doctor concluded, “a person as Full of Sh*t as Antonin Scalia should almost certainly be in a hospital.  Or at the very least in a low-stress environment where he can be monitored and begin to get proper care.”

“I don’t know what his current doctors are thinking, but if you ask me for my medical opinion, I’d tell you this:  the last place on Earth that I would hope to find a person that Full of Sh*t is sitting on the Supreme Court of the United States.”