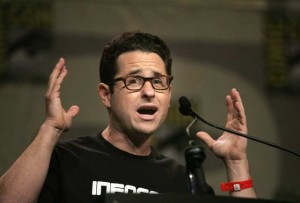 Fans of JJ Abrams, Damon Lindelof and Carlton Cuse probably feel like they’ve been here before: characters that don’t make sense, numbers that don’t add up, inexplicable mismatches between the past and the present — it’s all so familiar.

“Yeah, it’s true”  stated fan Jessica Figaro of Houston, Texas, “after the ‘Lost’ finale I promised myself I’d never trust those guys again, but here I am: hooked on ‘Romney.’  I’m such an idiot; I just know they’re gonna burn me again.”

Chris Harper, another loyal viewer, agreed, “if anything, this Romney guy makes less sense than anything on that damned island. I mean, the big campaign finale is right around the corner and they still haven’t explained anything.”

Producer Abrams, well aware of the mounting skepticism amongst fans disheartened by the utter inadequacy of the final season of “Lost,” insists that this time things will be different:  “Look, I know it seems like we’ve painted ourselves into a ludicrous corner with this Romney character.  I know it does. I mean: who is he, right?  Is he the liberal from the flashbacks or the crazy ‘strict’ conservative from the alternate storyline?  What’s he hiding in those weird island banks?  Why would someone put $100 million in an IRA and why won’t he release his tax returns?  I get it.  I really do.  But trust me on this: everything that seems inexplicable will be explained — we’ve known where all this was headed from day one.”

Arnold Irvin — a disaffected blogger who once spent three weeks diagraming a ‘Grand Islandification Theory’ in an attempt to explain the plot of “Lost” — was skeptical.  “My fat ass they know,” he intoned on reading Abram’s statement, “I learned my lesson last time.  Seriously dude, a smoke-monster is one thing, but a guy who is suddenly opposed to the health care law he designed?  It defies credulity.  Mitt is simply a different human being in the ’94 timeframe stuff …  That is, of course, if he is a human being at all.”

Rolling his eyes, the portly blogger concluded, “I just can’t wait to see Lindelof not explain any of it.  Asshole.” 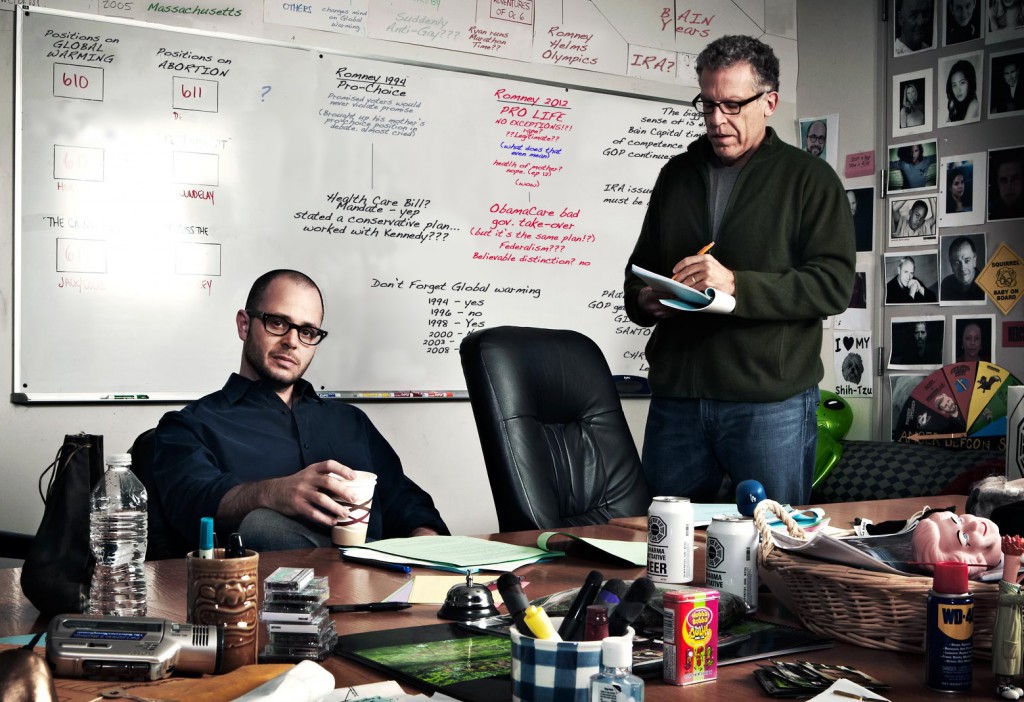 Lindelof and Cuse Map Out the “Mittstery”
(Possible clues on the white board? Click image to enlarge.)

Other fans were less pessimistic. “I understand where Arnie’s coming from,” fellow blogger Jack Cory stated, “but I think I have this nut cracked.  It’s just gotta be a body snatcher scenario.  The way I figure it, aliens abducted and replaced Romney and several other highly placed officials in early 2007. That explains Mitt’s odd, inhuman demeanor and his change in fundamental beliefs.  You see, my thinking is that the alien planet has procreation problems and that’s why ‘Replicant Romney’ is suddenly so opposed to abortion even to protect the health of the mother.”

Melissa Faber, the bestselling author of “Mittstery: A Guide to the Romnillogical World of the Romney Show,” is not sold on Cory’s theory.  “The body snatcher school of thought just doesn’t go far enough in explaining the inconsistencies that exist in the physical world,” she offered, “I mean the Ryan Budget exists.  It’s like a physical thing.  And it’s supposed to be brilliant and wonky but the numbers in it don’t make any sense according to any math we know … It’s like a Rosetta Stone to the whole show, I think: it balances the budget by  not balancing the budget. And that’s not possible: at least not in our reality.”

Continuing with some enthusiasm, Faber explained, “It’s gotta be multiple universes, you see.  There was a rip in spacetime and both Ryan and Romney fell through.  That explains the budget and Ryan’s marathon time: numbers are different in their world! I mean, the first time I heard the lie Ryan told about his marathon time, I thought it was just a throwaway thing.  Meaningless.  But then it kinda sat there like a splinter in my brain: Why would he lie like that?”

“Then it hit me: multi-verse!  It really was the key to figuring it all out.” 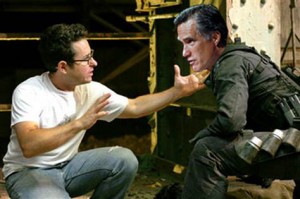 The idea that alternate realities are involved also appeals to noted Astrophysicist Neil DeGrasse Tyson who has been following “Romney” with some interest. “It would certainly be difficult to adjust to a new universe with utterly different rules and mathematics,” the thoughtful and affable Tyson reflected, “that really could explain why such a supposedly brilliant manager like a Mitt Romney could suddenly seem like such an incompetent buffoon. It could also account for the incorrect position of the stars in several of the exterior scenes early in season one. Just a fascinating idea!”

Whatever the truth — Abrams, Cuse and Lindelof are playing it close to the vest. “We’ve mapped this thing out,” Lindelof says, “I promise that it’s not a dream or the afterlife or anything like that.  At least, not precisely like that. I … hmmm … I’ve probably said to much.  Anyway, you’ll see.  And I promise you’ll find it satisfying … emotionally, I mean  … at least in some measure.”

Millions of viewers hope so.  And though Jessica Figaro still numbers amongst them, she watches now with a growing sense of dread as she tries fervently to brace herself for disappointment, “Honestly, if it turns out the guy is just a big liar who will say anything to anyone just to get ahead … Well, that will just suck.”

This entry was posted in Also Inside, Filter, Humor. Bookmark the permalink.