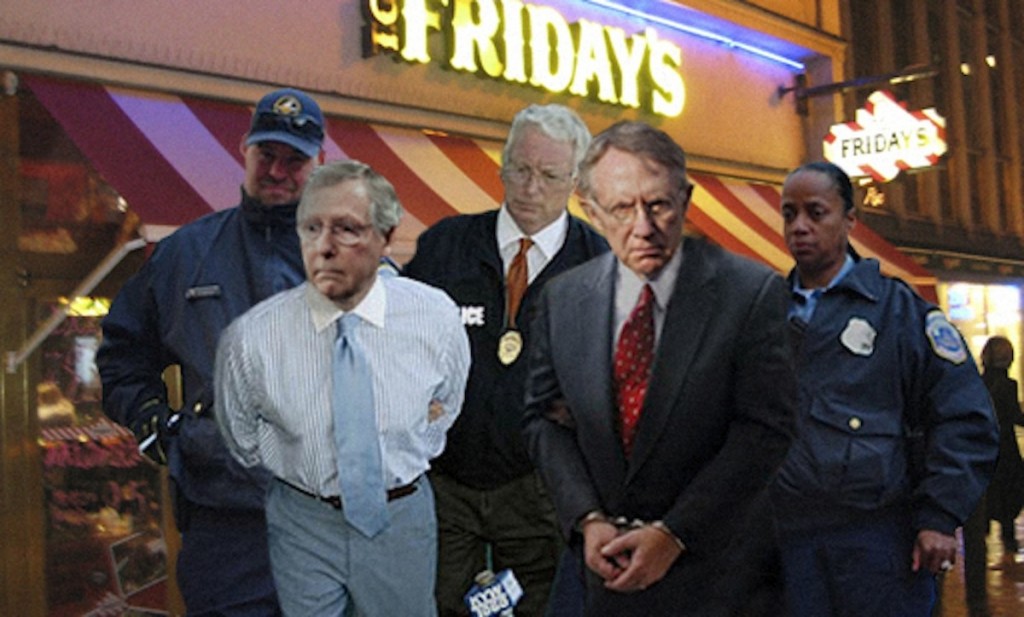 Senate Republican Leader Mitch McConnell (R-Ky) and Senate Majority Leader Harry Reid (D-Nev) were arrested early Monday evening after leaving a DC area TGI Fridays without paying a dinner and drink bill reportedly valued at $58.72.  The pair insist they had no intention of defrauding the restaurant but rather had simply adjourned a conversation concerning the splitting of the tab “until a later date.”

“I tried to explain to them that that kind of logic doesn’t apply at ‘Fridays’ … that there are rules, and you have to pay before you leave the premises,” stated restaurant manager Jackson Thomas, “But I turned around and they were gone — just up and left.  Luckily [DC police] Sergeant Stevens and his friends were eating a couple tables over and they were able to nab them outside.”

Indeed, arresting Officer Timothy Stevens was not surprised that law enforcement assistance was required in the wake of the Senators’ dinner.  “I was eyeballing those two clowns for almost forty-five minutes while they argued about the damn bill,” Stevens stated with a bit of a sneer, “it was insane. McConnell was all: ‘you had almost all of the Tapa-tizers and I only got a salad’ and then Reid would whine back ‘I don’t drink and those TGI Coolers you got were expensive.’”

“Seriously, it was painful.  Just totally obvious those two weren’t gonna be able to settle anything . . . ever.”

Kathryn Miller, the server who waited on the pair of powerful men seemed equally disgusted.  “The two of them were simply intolerable.  All they did all night was flirt with me and talk about how I was exactly the kind of hard-working American they were all concerned with.  Then, when the check came they started saying stuff about ‘base-line principles’ and ‘taking a stand’ … I told them that if they skipped out on the bill I’d get in trouble, but that really didn’t seem to matter to them.  They were too busy fighting about the Tapi-tizers.”

Both Senators Reed and McConnell have posted bail but, citing legal advice, declined to comment further on the situation.