Mitt Romney Makes Final Pitch to Swing Voters: “I Too Am Undecided” 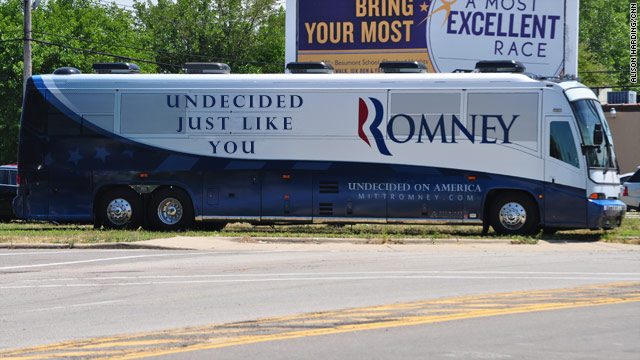 With under two weeks to go in the 2012 presidential race, Republican Mitt Romney is making a surprising closing argument to America’s undecided voters.  While most commentators expected Romney to reject the notion that he has shifted positions precipitously throughout the campaign, the former Massachusetts Governor has decided to take a different course and embrace his mercurial record as a positive.  “I am one of you, my undecided friends,” Romney pronounced again and again on the stump this weekend, “If you are an undecided voter, then I am the undecided candidate you have been looking for.”

Though unconventional, the pitch has impressed many pundits and has some Democrats more than a little concerned.  “It’s a simple, evocative message based on a new kind of identity politics,” stated a clearly agitated James Carville, “I can’t believe I didn’t see it coming.  I hate it cause it’s absurd.  But I love it cause it’s crafty.”

Others in the field are more unreservedly impressed.  “It’s utter genius,” said pollster Jacob Feldmeyer of the website Politivibe, “and it’s just classic Karl [Rove].  You take a perceived weakness, like flip-flopping, and turn it into a strength.  Sure you or I might say Mitt Romney is an opportunist who believes in nothing, but Karl takes that same record and says ‘hey, swing voters, this guy is just like you!  He’s still thinking things through.” 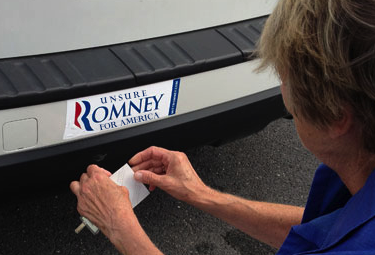 Regardless of the explanation for the behavior, it is beyond dispute that Romney has switched positions with head-spinning speed and facility throughout this election cycle.  In the last month alone, he has abruptly reversed his stance on the weighty matters of abortion rights, tax fairness, the war in Afghanistan, America’s posture towards Iran, gun violence, and comprehensive immigration reform — just to name a few.  In prior political seasons, such ideological malleability would have been seen as a liability.  But that might be changing in what is now being thought of as the Romney (or perhaps post-Romney) era.

“Look,” said Republican strategist and pollster Frank Luntz, “there’s no reason that these things have to be cast as unfavorables.  It’s all about the words you choose.  ‘Lying,’ ‘mercenary,’ and ‘unprincipled’ poll badly but ‘undecided,’ ‘adaptable,’ and ‘open-minded’ prove to be quite appealing.  So what right does the liberal media have to pass judgement?  No right, I say.  None at all.”

Predictably, many on the left differ with Luntz’s formulation.  “Are you shitting me?” asked MSNBC’s Chris Hayes, “I’m all for calling normative judgements into question but .. wow!  I mean.  Wow!   I wanna say something thoughtful here about the distinction between sophistry and useful political discourse but all I got at the moment is ‘holy shit’ and ‘wow!’” 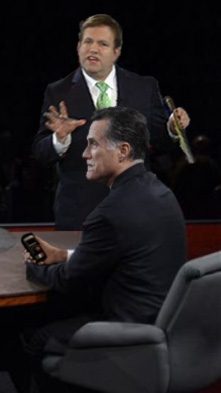 Luntz Explains the Process to Viewers While Romney Rides the Dial

At least on that score Hayes and Karl Rove agree.  “We really have been wowed by the response!” said Rove, “Our first ‘undecided candidate’ spot tested off the charts and is getting rave reviews now that it’s in the field.  We’re sensing a big swing amongst low information voters who really like the idea of seeing one of their own holding the highest office in the land.”

Indeed, while roundly criticized by the left, the extended advertisement Rove references is getting quite a response on both television and the internet.  In it, Frank Luntz puts Romney through the same process he usually reserves for undecided voter panels on Fox news — asking him a series of questions about how disappointed he has been with President Obama and then showing him excerpts from the three presidential debates.  As he watches himself discuss issues, Romney registers his opinions by turning a dial to indicate the degree to which he agrees or disagrees with himself in real-time throughout the debate.  As shown in the ad, his score indicates about 50% self-agreement — closely mirroring the attitudes of undecided voters, and prompting Mr. Luntz to pronounce that Mr. Romney truly is “the undecided candidate.”  The advertisement then concludes with Romney shrugging and half-heartedly saying “I’m Mitt Romney and I approved this message” in a tone that suggests he is more asking a question than making a statement. 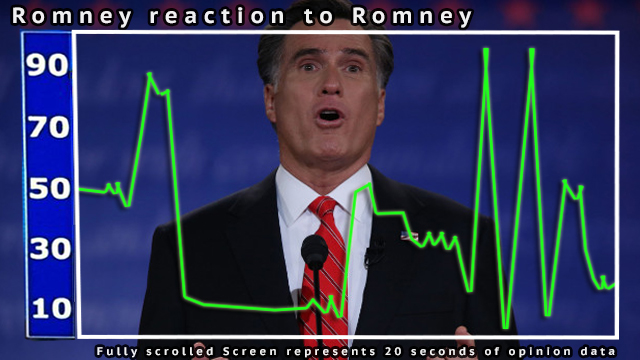 A little Romney on Romney action from the popular ad.

So far, the spot is an enormous hit.

“It just really appeals to me that he can’t make up his mind either,” stated Jan Kirkland an undecided voter residing in Des Moines, Iowa.  “I mean, I’m really concerned about my rights as a woman and also the environment.  But while I really would like to say I’m pro-choice, I just don’t know that I’m pro-choosing.  So maybe Mitt really is the man for me.”

Maybe he is or maybe he isn’t.  But if Romney has a chance of pulling off an upset on November 6, one thing is clear: he needs voters who think like Jan Kirkland.

“People are changing their mind on Mitt changing his mind,” said Karl Rove as he scribbled incomprehensible numbers on a small white board on this week’s Meet The Press, “This is what I do.  And I’m betting that there are lots of Jan Kirklands in America.  Lots and lots and lots of them.  I can’t say there are enough for sure.  But I think there might be.  And if we get them to vote — if we get them to understand that it is a-ok that Mitt Romney has been all over the map on every critical issue facing this nation and the world at large — well, then, it’ll be thanks to thinkers like her that America wakes up to a new President on November 7th, 2012.  It’ll be thanks to thinkers like her.”

1 Response to Mitt Romney Makes Final Pitch to Swing Voters: “I Too Am Undecided”