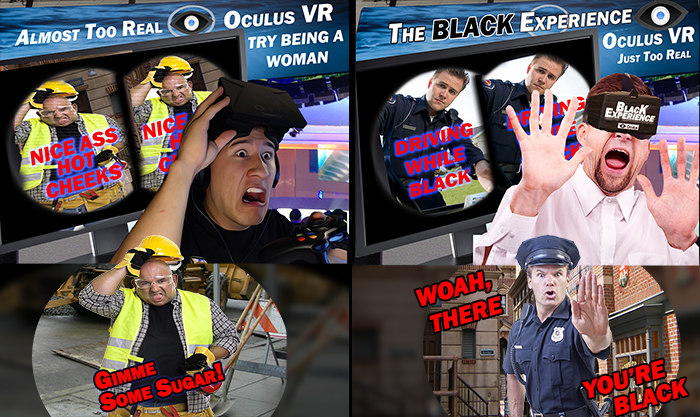 Can Virtual Reality Be Too Real for Some Gamers?

(Los Angeles)  In what is being referred to alternately as VR-GATE and GAMERGATE2, a new controversy has developed in the gaming world surrounding safety limits and the ever-more-convincing experiences delivered by virtual reality devices.

Apparently at the most recent GDK (or Game Developers Conference) in San Francisco, several young, white male gamers (most of whom self-identified as members of the “gamergater” community – a social media group that has strongly opposed the notion that discussions of diversity or social justice can have any role in gaming) were so horribly traumatized by two virtual reality installations that they needed to receive immediate medical attention.

In one such experience, the young male was forced to experience what it would be like to be a woman walking down the street.

In another, the “viewer” was given a small window into what it would be like to be black in America.  Just for a few minutes.

Both of these two experiences proved too much for several young white men who were indignant at being exposed to the troubling content.

“Sure we wanted really horrifying experiences,” said one Gamergater known to the community simply as Josh ‘Master Chief’ Johnson, “but we didn’t want REAL experiences that are actually uncomfortable or disturbing.  I mean — actually dealing with people like me is no fun.  I deal with me every day in reality, and I don’t like me.  And that’s BEING ME … which I just found out is a lot more fun than being a minority or woman in my vicinity.”

“There’s just no call for this kind of experience in gaming,” he concluded. “Companies and artists should think much harder about what kind of content they’re putting out there.  They could really do damage to people like me with this kind of thing.”